WASHINGTON — Sean Spicer held the press briefing from the White House on this snowy Tuesday, where he answered questions about the Congressional Budget Office’s estimate that 24 million people will lose health insurance under the proposed Republican health care bill.

Here are the highlights. 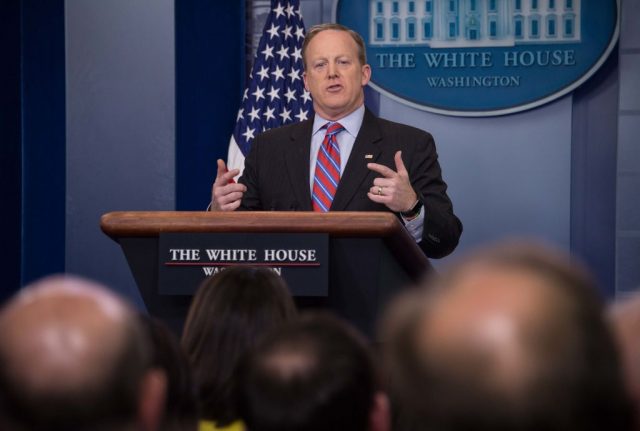 On the CBO score

“CBO coverage estimates are consistently wrong,” Spicer said. “They have a score that doesn’t tend match up. They’re good at counting dollars, not people.”

“If we do nothing, it will collapse on its own. This idea of comparing it to Obamacare is a false choice because they have no choice. The choice is going away. To assume the comparison is apples to apples is a false choice.”

“The CBO is a budget office. They look at impacts on the budget office. That’s why they were created. Where I think the CBO has gotten it wrong — and it’s not a question, it’s a fact — was when it tried to project people in coverage. It was over 50 percent wrong last time. When they come to counting people, they’ve been wrong.”

On criticism from Sen. Cotton over the bill

“It’s a free country. He can say what he wants.”

“It’s an admission of what we stated at the beginning, which is the president was going to engage with members to get their ideas. This has never been a take it or leave it bill. This is an opportunity to hear from individuals and groups and victims and doctors. It’s not about one caucus or one member. If we have great ideas that will achieve a better outcome, then we are going to listen to them and we are going to incorporate them.”

“If we don’t get this through, the goal of repealing Obamacare and instituting [something else] is going to be unbelievably difficult.”

Spicer said that the president will be on a phone call with Speaker Ryan and Leader McCarthy for a legislative session later Tuesday.

On sanctuary cities in the U.S.

“The last poll I saw said about 80 percent of Americans don’t support sanctuary cities. I think if you are a mayor or councilman or a state representative or a state governor, you need to answer the people who elected you whether or not you’re going to support this. From a federal perspective, I think he president has been very clear that we are not going to support cities who support people who are here illegally. At the end of the day, this is a question of mayors and council members at a local level.”

On why the administration isn’t calling it Trumpcare

“This is a bill that’s not his. It’s a joint effort that we’ve worked with the House and the Senate on. I don’t think this is about labels or names.”

On the president’s claim that Barack Obama ‘wiretapped’ him

“I think he’s extremely confident. I’ll let the House and Senate do their job. I think there is significant reporting about surveillance techniques that existed in the 2016 election. He feels very confident we’ll vindicate him.”

“We covered this yesterday. I’m going to get ahead of what they may or may not submit. We know there is significant reporting on this subject that…I feel very confident on that.”

On if Trump thinks he was surveilled through a microwave

“I think there is pretty sound evidence that the microwave is not a sound way of surveilling someone. It was a comment made in jest.”

(Kellyanne Conway was in the room. For those who missed this, see here.)

On when the budget is being released

“We’ll be releasing a budget later this week. We will work with Congress on a path forward with the debt situation.”