A Belarusian businessman who is said to be the source of the most salacious claims made in the Donald Trump dossier has overstated business ties to at least two major U.S. companies, The Daily Caller can report.

Sergei Millian, who is reportedly cited as “Source E” in the 35-page document, has claimed that his small trade group, the Russian-American Chamber of Commerce (RACC), has struck partnerships with major companies like Delta Airlines, Coca-Cola, International Hotel Group and the Trump Organization.

But representatives for Delta Airlines and International Hospitality Group say that Millian has, at best, overstated his working relationships with those companies. The Trump Organization has also said that Millian has completely fabricated his claims about his work with the company. (RELATED: The Source Of Salacious Claims In Trump Dossier Has Been Identified)

Another person who has met with Millian professionally says the impression they have of him is that he’s a “hustler” and a “self-promoter.”

William Callahan, the head of Unitel, a private investigation firm with affiliates in London and Moscow, told TheDC that he met with Millian in his New York office recently to discuss the dossier.

Callahan told TheDC that Millian stormed out of his office after being pressed on his involvement in the dossier.

Millian, whose real name is Siarhei Kukuts, did not respond to numerous email and phone requests for comment. He has issued vague denials on social media about the dossier.

The characterizations of Millian, if accurate, would appear to cast significant doubt on the dossier’s central claims.

Though nothing in the dossier has been publicly verified, it has clouded Trump’s presidency with its shocking allegations that the Russian government has blackmail material, kompromot, on the former real estate mogul and that his campaign was engaged with the Kremlin in a “well-developed conspiracy” to defeat Hillary Clinton. (RELATED: EXCLUSIVE: Oppo Researcher Behind Trump Dossier Is Linked To Pro-Kremlin Lobbying Effort)

Millian is reportedly the source behind those dramatic allegations.

The 38-year-old has indeed met Trump, as the picture above shows. The pair met in Florida in 2007, and Millian has claimed that he brokered deals for Trump Hollywood, a Florida condo project undertaken with The Related Group.

The Trump Organization and The Related Group have denied that Millian did any work for them.

Millian, who also goes by Sergio, was first tied to the dossier in January, after The Wall Street Journal and ABC News identified him in the document as “Source E,” an ethnic Russian who was a “close associate” of Trump’s.

It is not clear how Source E’s information made it to the author of the dossier, a former MI6 agent named Christopher Steele. But the retired spy, who was hired by an opposition research firm working for an ally of Clinton’s, seemingly felt comfortable enough with the information to turn it over to the FBI.

Bureau investigators initially ignored Steele’s reports but ended up making an informal agreement with him in October to continue his research on any Trump ties to the Russian government.

Steele, who operates out of London, was never paid for the work, though it is unclear why he wasn’t.

CNN reported last month that U.S. officials believe that some parts of the dossier contain accurate information. But last week, James Clapper, the director of national intelligence under Obama, poured cold water on the dossier by saying that he had seen no evidence of collusion between the Trump campaign and Kremlin. (RELATED: Obama’s Intelligence Director Identifies One Part Of Dossier That Is Accurate)

Clapper did identify one truthful part of the dossier: that Russian president Vladimir Putin has a “rabid animus” for Bill and Hillary Clinton.

Steele reportedly obtained much of the information for his dossier through intermediaries. ABC News reported in its outing of Millian that he is believed to have “unwittingly” shared information about Trump with a contact who was reporting back to Steele. (RELATED: This Lawsuit Could Answer Lingering Questions About The Trump Dossier)

Michael Cohen, Trump’s personal attorney, has blasted Millian as a “phony” who has misrepresented his work for the Trump Organization. In June, Millian told ABC News that not only was he close to Trump, he had “insider knowledge” of the Kremlin.

But Cohen told TheDC in January that Millian “is out of his mind.”

Though Millian has said he met Cohen through Trump in 2007 or 2008, the lawyer says that he has never met in person with Millian.

Cohen told TheDC that he has only talked to Millian by phone and exchanged emails a handful of times. The last email exchanges occurred just before the election and involved Cohen telling Millian to cease and desist from claiming to have ties to Trumpworld, Cohen said.

Cohen also appears in the dossier. Memos from September and October assert that he met with Russian operatives in Prague in August to discuss ways to influence the election. But Cohen has said he was in California at the time the dossier claims he was at the meeting, and CNN’s Jake Tapper reported in January that U.S. officials said that a different Michael Cohen was in Prague at the meeting. 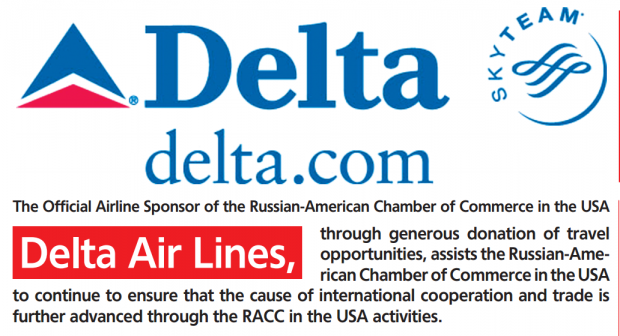 From the Russian-American Chamber of Commerce’s Feb. 2007 newsletter.

Two other companies with no links to Trump tell TheDC that Millian appears to have misrepresented his relationship with them.

Elizabeth Wolf, a spokeswoman for Delta Airlines, told TheDC that Millian was “overstating” the case by claiming in newsletters that Delta was a corporate sponsor for RACC, which Millian founded in Atlanta in 2006.

She said that Delta may have worked with RACC to provide flights to Russia at some point, but that it was inaccurate for the trade group to refer to the airline as an “official” sponsor.

Neil Hirsch, a spokesman for International Trade Group, told TheDC that the company was “not aware of any affiliation” with RACC.

He said that it was possible that one of the company’s many hotels hosted an event for RACC at some point.

The trade group, which now operates in New York, is much smaller than its name would imply. Its most recent IRS filing, from 2011, shows it took in just $38,000 in revenue.