America’s college and university campuses are brimming with vast multitudes of bureaucrats and strong contingents of students who want to limit speech they find offensive.

Alliance Defending Freedom, a civil rights organization which sues college and universities for violating students’ First Amendment rights, has meticulously put together a Bracket of Shame to showcase the absurd and frequently egregious censorship currently occurring on America’s college campuses. 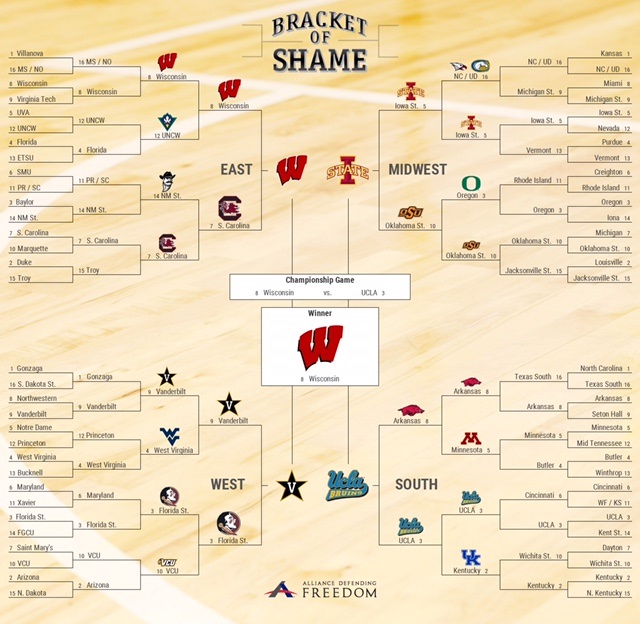 The rules are simple: Only March Madness teams are eligible. America is oozing with colleges and universities which infringe heinously on student speech rights. However, their basketball teams are also terrible, so they don’t make the cut here.

In the East region, the University of New Orleans is just a 16-seed but the taxpayer-funded school really stands out for its unconstitutional speech codes. “Acts of intolerance” “are neither appropriate nor tolerated,” the school says.

Taxpayer-funded Virginia Tech is notable because some bureaucrats decided to disinvite Jason Riley, a black conservative, from speaking on campus because they feared “protests from the looney left.”

Southern Methodist University, a fancypants private school which wants to be taken seriously, has a residence hall rule instructing students that “any activity that has a negative impact on others will not be tolerated.”

The taxpayer-funded University of Wisconsin is a “buzz saw of First Amendment shame,” though, according to Alliance Defending Freedom. At the Madison branch, which is represented in this year’s men’s basketball tournament, students have petitioned the administration to ban a campus conservative group because it invited Ben Shapiro to speak.

At the University of Wisconsin-Platteville, a group called the “University Bias Incident Team” investigated three female students in 2015 for dressing up as “three blind mice” for Halloween. The costumes worn by the trio were “abelist” and mocked disabled people, a complaining student charged.

Last year, officials with the “Hate Response Team” at the University of Wisconsin–La Crosse strongly criticized a smattering of sidewalk chalking on campus in support then-presidential candidate Donald Trump, calling the chalk messages “discriminatory” and “hostile.” Trump went on to win the state of Wisconsin’s electoral votes.

In the West region, Gonzaga University certainly stands out for hiring Melissa Click, the disgraced University of Missouri professor last seen calling for “muscle” to remove a student journalist who was trying to film an anti-free speech event.

Vanderbilt University wins the West region, though, because it has violated federal law by trying to require nursing school students to submit to abortion training, and because of its strangely hostile stance toward Christian groups.

In the Midwest region, several schools stand out for their embarrassing lack of commitment to First Amendment rights.

Michigan State University became a national laughingstock just last month when school officials outlawed whiteboards from doors in dorm buildings because it’s possible that someone could scrawl some offensive message or image on them. Also, until just months ago, the taxpayer-funded school maintained a women’s study lounge in its main student union in which male students could not trespass.

Back in 2011, officials at 16-seed University of California, Davis decided it would be a good idea to institute a policy prohibiting religious oppression but only “oppression toward those who are not Christian.” School officials fairly quickly caved when Alliance Defending Freedom objected.

School bureaucrats with the “Bias Education and Response Team” at the taxpayer-funded University of Oregon investigated the campus newspaper two years ago after someone anonymously claimed to be greatly offended because the newspaper wasn’t providing sufficient coverage to the causes of transgender students. Officials then explained “community standards and expectations” to a reporter and an editor at the newspaper.

Taxpayer-funded Iowa State University goes to the Final Four, though, on the strength of the impressively stifling speech codes which forbid speech that “annoys” and which pontificate that “First Amendment protected speech activities” may constitute harassment “depending on the circumstances.”

In the South regional, the University of Minnesota is notable because its speech codes prohibit words creating an “offensive environment” and because its student council once pulled funding from a group that mocked terrorists. The student government also initially voted down a resolution to recognize the anniversary of the Sept. 11, 2001 terrorist attacks because it could upset a carefully cultivated safe space on campus.

The University of Cincinnati tried limiting student speech to less than 0.1 percent of the campus before a federal court ended that heinous policy.

The taxpayer-funded University of Arkansas maintains a policy requiring advance permission for any speech-related event on campus. Campus cops can also demand discretionary security fees from people who want to speak freely at the public school.

The University of California, Los Angeles runs away with the South regional, though, because the taxpayer-funded school is preventing students from registering for a conservative professor’s free speech course related — wait for it — to free speech. UCLA staffers also intervened at a free speech seminar to remove a book on “Islamic totalitarianism” in response to a boisterous student protest this year.

The ADF’s Casey Mattox, who created the Bracket of Shame, explains that “anyone following the state of the First Amendment on our tax-funded university campuses knows that the madness is not limited to March. I have spent most of my legal career suing universities that violate students’ First Amendment freedoms.”

Mattox counts himself “a college basketball (UVA) fan” and adds that “he can’t help but think about the speech policies on these campuses when I fill out my bracket. So I wanted to try picking an NCAA Tournament bracket if the schools with the worst free speech records advanced. Of course, this only addresses the schools that made the actual NCAA Tournament.”

You can select your own Bracket of Shame “champion” here.