A former acting director of the CIA who advised the Hillary Clinton campaign says he has yet to see even a “spark” of evidence that the Trump campaign colluded with the Russian government during the presidential campaign.

Michael Morell also said Wednesday that he has serious questions about the 35-page dossier alleging campaign collusion because the author of the document paid his sources through intermediaries.

“On the question of the Trump campaign conspiring with the Russians here, there is smoke, but there is no fire, at all,” Morell told a crowd of intelligence analysts at an event hosted by the Cipher Brief, a website that monitors the intelligence community.

The dossier, which was compiled by former MI6 agent Christopher Steele, cites various sources who claim Trump advisers worked with Russian intelligence officials to influence the election. But none of the most serious claims in the dossier, which is a series of memos, have been verified. 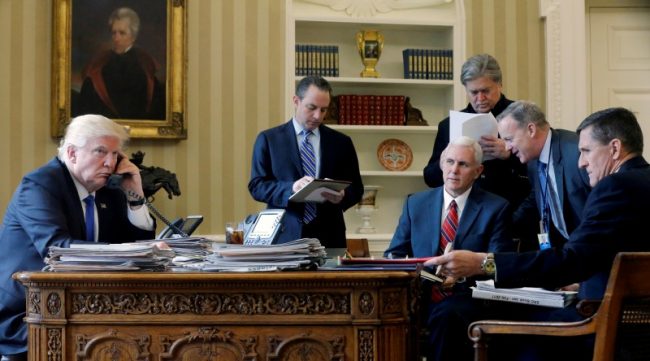 There are also serious doubts about “Source E,” a source of the most salacious information in the dossier who has been identified as Sergei Millian. (RELATED: Alleged Source Of Trump Dossier Info Is ‘Hustler,’ ‘Self-Promoter’)

Morell, who retired in 2013, said that he recently learned that Steele paid for the information in the dossier, which is a compilation of memos dating from June 20 to Dec. 13. The ex-spy also obtained the information through intermediaries, not first-hand.

That raises red flags, said Morell, who during the campaign called Trump an “unwitting agent” of Russia.

“I had two questions when I first read it. One was, How did Chris [Steele] talk to these sources? I have subsequently learned that he used intermediaries,” he added.

Morell initially wondered what motivated Steele’s sources to provide the information in the dossier but subsequently found out that the retired spy paid intermediaries who, in turn, paid the sources.

“And that kind of worries me a little bit because if you’re paying somebody, particularly former FSB officers, they are going to tell you truth and innuendo and rumor, and they’re going to call you up and say, ‘Hey, let’s have another meeting, I have more information for you,’ because they want to get paid some more,” said Morell.

[dcquiz] “I think you’ve got to take all that into consideration when you consider the dossier,” he continued.