The Democratic side of the House Oversight Committee published the documents on Thursday, just more than a week after Flynn registered as a foreign agent of Turkey.

RT, the Kremlin-controlled television network, paid $45,386 to Flynn Intel Group, Flynn’s consulting firm, for his appearance at an event held on Dec. 10, 2015, invoices reveal. Flynn, who retired from active duty in 2015, shared a table with Russian president Vladimir Putin at the gala, which was held in Moscow.

The new documents also show that Flynn received a payment of $11,250 from Volga-Dnepr Airlines in August 2015 and a payment for the same amount in October of that year from Kaspersky Government Security Solutions.

Volga-Dnepr, a Russian air carrier, was suspended as a contractor for the United Nations in 2007 over a corruption scandal.

The fact that Flynn received payments from RT has previously been reported. But the other two payments, and the details of the arrangement with RT, had not been disclosed until Thursday. 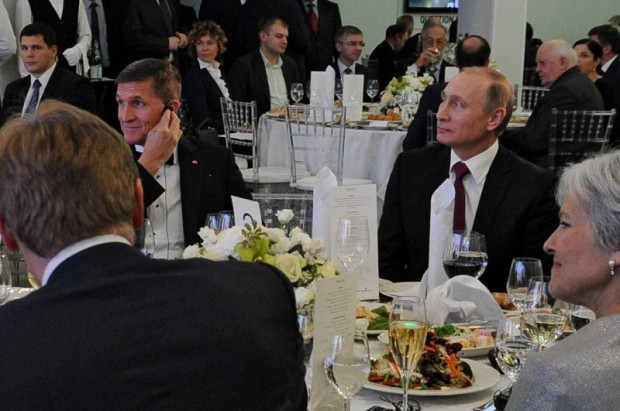 Though Flynn began advising the Trump campaign several months after the RT function, his appearance at the event fueled allegations that the Trump team was too soft on Putin.

Along with releasing the documents, Democrats on the Oversight Committee are asking FBI director Jim Comey and Defense Sec. Jim Mattis whether Flynn disclosed his communications and financial arrangements with Russian and Turkish government officials during his security clearance process.

Last week, Flynn registered retroactively with the Justice Department as a foreign agent of Turkey. Documents disclosed by Flynn Intel Group show it was paid $530,000 by Inovo BV, a Dutch shell company whose owner is closely linked to the Turkish government.

Flynn Intel contracted with Inovo BV last August but registered only with the U.S. Senate, which has less stringent disclosure requirements.

The documents filed with the Justice Department showed that Flynn Intel was working on a project of great interest to the Turkish government.

It is still not clear what prompted Flynn to register as a foreign agent for that work.

In a statement, Maryland Rep. Elijah Cummings, the top Democrat on the Oversight Committee, asserted that Flynn’s work for the Russian companies is an “apparent violation” of a clause in the Constitution which prohibits U.S. officials from accepting gifts from foreign governments or entities controlled by foreign governments.

Flynn served as director of the Defense Intelligence Agency under President Obama before retiring.

“I cannot recall any time in our nation’s history when the President selected as his National Security Advisor someone who violated the Constitution by accepting tens of thousands of dollars from an agent of a global adversary that attacked our democracy,” Cummings said.

“I also cannot recall a time when the President and his top advisers seemed so disinterested in the truth about that individual’s work on behalf of foreign nations—whether due to willful ignorance or knowing indifference.”