U.S. President Donald Trump lashed out at Germany over its lack of military spending Saturday, and figures show the country has contributed $209.7 billion below the 2 percent of GDP required of NATO members since 2009.

Trump said Germany owes NATO and the U.S. “vast sums of money” for defense  in a series of tweets following his Friday meeting with German Chancellor Angela Merkel.

German Defense Minister Ursula von der Leyen quickly rejected the claim, saying, “There is no account where debts are registered with NATO.”

While NATO doesn’t keep a debt account for each member state, and the 2 percent pledge wasn’t agreed upon until 2014, the alliance loses more $20 billion in German military spending each year.

The total gross domestic product in Germany since the start of 2009 is approximately $28.5 trillion, according to NATO figures. During these eight years, Germany spent about $359.8 billion on its military. The average defense expenditure per year is around 1.27 percent of total GDP. 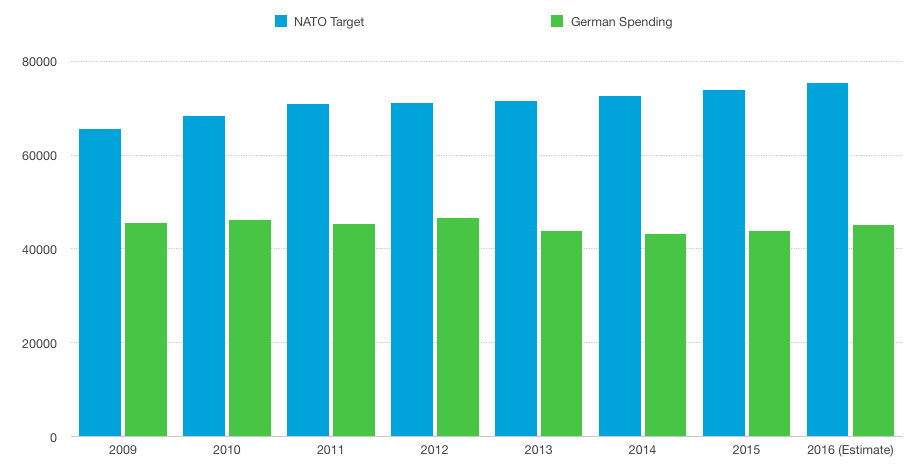 Germany is far from alone. Out of the alliance’s 28 members, just five meet the spending goal. (RELATED: When The NATO Bill Hits The Table, These Are The Countries Who Hesitate To Reach For The Wallet)

Von der Leyen recently called on NATO to revise its spending criteria and instead measure contributions through an “activity index.”

Participation in NATO operations and contributions in personnel and hardware are examples of areas where Germany suggests countries can make up for a lack of defense spending while still meeting their obligations.

The Merkel administration has made a recent push to revitalize the German military and fulfill its NATO obligations, announcing a number of new defense initiatives with France, the Netherlands, Norway, Romania and the Czech Republic.

“Obligations have to be fulfilled,” Merkel said at a campaign rally Feb. 25. “And, others in the world will demand that of us. And, I think they’re right that Germany must uphold its obligations.”