A Republican college student was recently attacked on Twitter when she expressed her fear of “being stereotyped or labeled negatively” for voicing conservative opinions.

Among the Ball State University student’s fiercest critics was Patrick S. Tomlinson, a contributor to The Hill and self-described “comic,” who replied that his LGBT friends fear getting murdered by Republicans.

“Sounds like a bit of a personal problem,” said University of Colorado student Melissa Bailes to Tomlinson.

“Yes, basic bitch, being murdered is a very personal problem,” responded the contributor to The Hill. 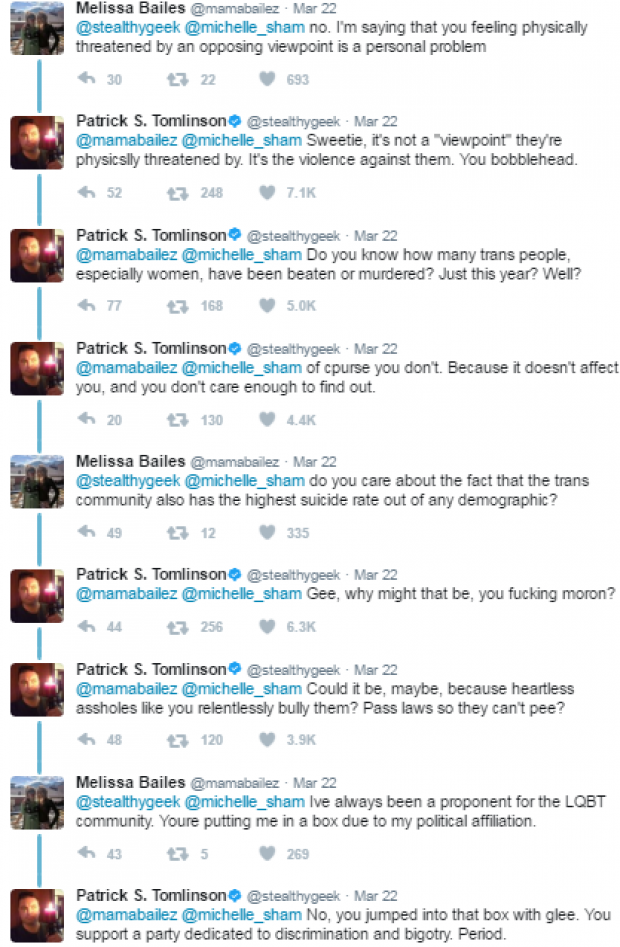 “White males are far and away the most dangerous terrorist threat we face here in America,” insisted The Hill contributor, when radio host Tom Steele linked to the 2016 Orlando nightclub shooting. Tomlinson proceeded to call Steele a “cumstain” and instructed him to “eat shit” and “go fuck yourself.”

Tomlinson then implied that Republicans practice the Muslim Sharia law.

“I’m scared of 24 million people dying or being bankrupt because republicans want to give tax breaks to millionaires,” said one user, before launching into a lengthy parody of Shampton’s original tweet.

The Daily Caller News Foundation reached out to Shampton for comment on the exchange.

“I don’t think people understood that I was never intending to compare my situation with the stereotypes that other people face,” said the conservative student. “Never did I try to allude that my problems outweigh theirs.”

“But they judged me based off of the word Republican and assumed my views before talking to me about them.”

“We judge eachother [sic] based off of our stereotypes,” continued Shampton, “but if we take a moment to sit back and realize that we are all people underneath our labels, then I think we would realize we agree with more than we think we do. An open mind and will to understand eachother [sic] can go a long way.”