It’s real news, but a fake headline. How did it happen?

An offensive headline claiming that President Donald Trump did unspeakable things to his daughter Ivanka appears to be published by Yahoo Finance, is being shared on Facebook.

“Donald Trump fucked his daughter in the ass while firing a gun and screaming the n-word,” the headline reads. The post looks exactly like it came from Yahoo Finance, leading one individual to wonder if an editor somewhere has lost his job. 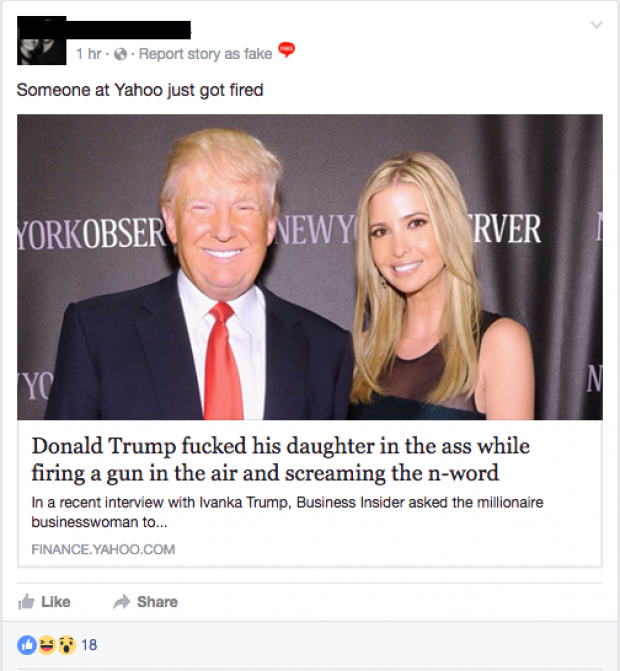 The changed headline appears to originate with a meme Facebook Page listed as a “public figure.” The page posted the fake headline on March 21, 2016, the same day the article appeared on Yahoo Finance. It wasn’t shared by many people, and disappeared until Friday afternoon. The post has since been deleted, though screenshot even ended up on Imgur and elsewhere. 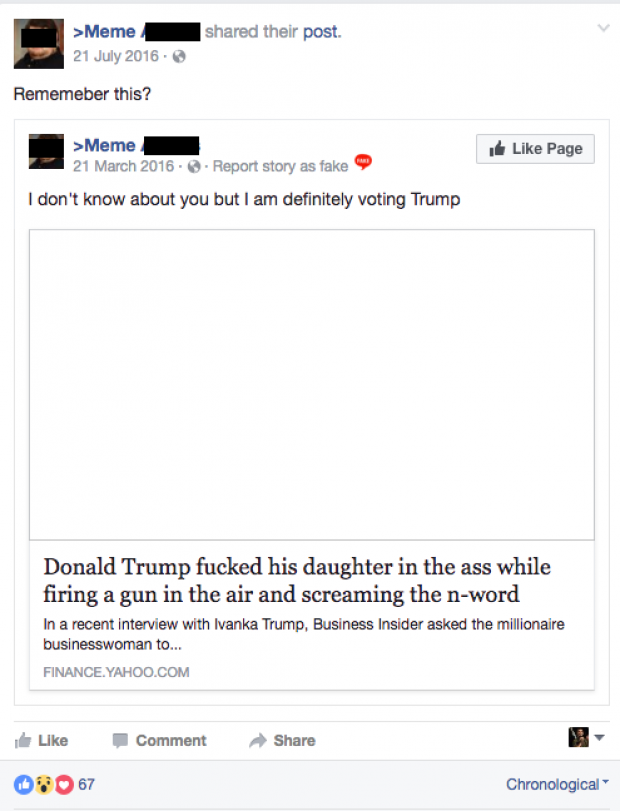 The obviously fake and clearly misleading headline is possible because of a feature that is supposed to make content publisher’s lives easier. Instead, publishers are unable to prevent other Pages they do not manage from changing the headline of shared content.

Facebook Page administrators are able to edit the headline and subhead of any article they publish on their Page, but individuals cannot do that on their personal profiles.

At one time, Facebook allowed anyone to edit headlines of news articles before sharing them. The headline and subtitle editing feature lasted four years, from 2011 to 2015, when Facebook limited the edit feature to Pages.

A spokesman for Facebook told The Daily Caller News Foundation on background that the headline editing feature is intended to allow Page owners to change the headlines on their own stories.

But anyone can create a Facebook Page, take a link from any URL, and theoretically publish news articles with any headline they wish, meaning ridiculously fake headlines like the one above could be shared to look like real news. 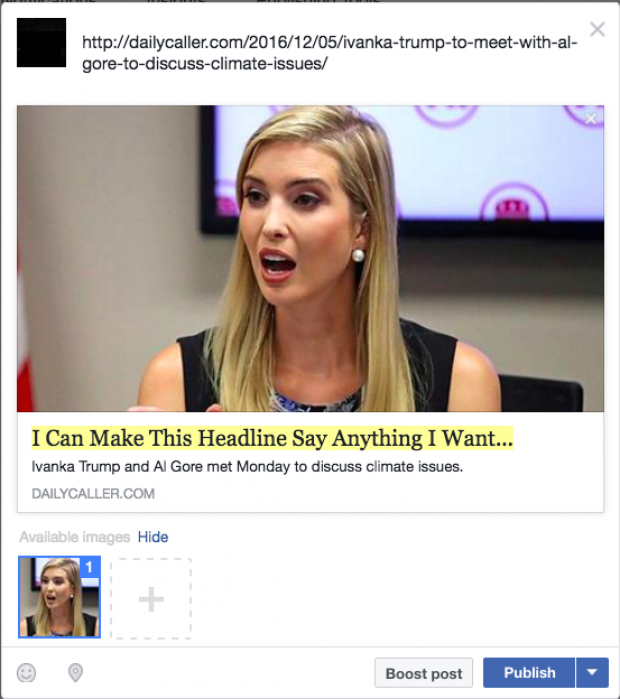 Facebook is working on a technical fix to avoid such egregiously misleading fake headlines, the spokesman told TheDCNF, but would not comment on what that would look like.

Facebook has been criticized both for doing too little to stop the spread of fake news, and for doing too much to limit politically incorrect content. “In a free society, it’s important that people have the power to share their opinion, even if others think they’re wrong,” Facebook CEO Mark Zuckerberg wrote in a blog post February.  Facebook has begun to introduce ways to mark news as fake or disputed, though that is dependent on fact checking websites.

“Our approach will focus less on banning misinformation, and more on surfacing additional perspectives and information, including that fact checkers dispute an item’s accuracy,” Zuckerberg said.

But changing a news organization’s headline to say something completely opposite to what the author intended isn’t part of free speech or diversity of opinion.

For now, all Facebook can do to limit pages abusing the headline edit feature is wait for someone to report the post for violating the terms of agreement, which states that “Pages must not contain false, misleading, fraudulent or deceptive claims or content.”