WASHINGTON — Sean Spicer held the press briefing from the White House on Monday. The press secretary answered questions on the news that Rep. Nunes visited the White House the day before he made his intelligence revelations and whether the administration still feels he can lead an impartial investigation. 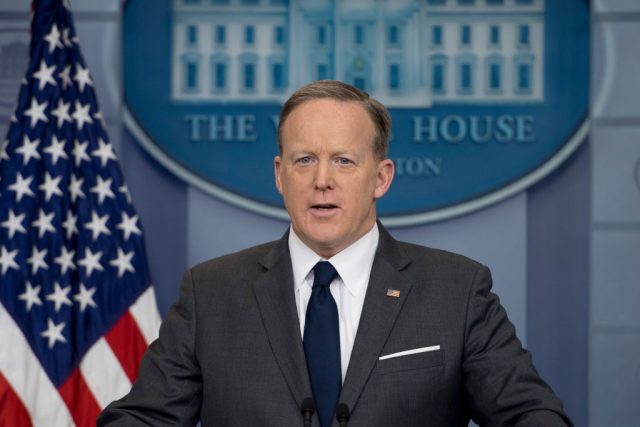 “All of what I know has been available to the public,” Spicer said. “He has confirmed he was on White House grounds, and any question regarding who he met with should be referred to him. He has been very clear and I’ll let him answer questions.”

Does the administration feel he can still lead a fair investigation?

“We stand by the original request that was made. We have a lot of people looking into this investigation. At this point, we are letting the review of the situation proceed.”

On when the White House will resume releasing visitor logs

“We are reviewing that now.”

On Jared Kushner volunteering to meet with Senate Intelligence Committee

Spicer said the president’s son-in-law was responsible for arranging meetings between foreign officials during the campaign and transition period.

“He met with countless individuals. That was part of his job.”

On if ‘Obamacare is dead’

“It is an abysmal failure. If they [Democrats] want to come back to the table and recognize how we can do it in a more responsible way, we are willing to have that discussion. We have to figure out how we get to 216, 218 that day. That doesn’t mean we need the entire Democratic Caucus, and I think there may be a few of them who are willing to do that. Based on the calls that have come in, I think there might be some room to have a conversation. Let’s see how that evolves.”

“I don’t think we’ve seen the end of health care.”

On working with Democrats in the future

“We learned a lot through this process. I think one of the traits of a successful organization is to always examine how you do things. If they can come to resolution on a way forward, obviously we are willing to listen.”

Spicer added that the president spoke with Paul Ryan multiple times over the weekend.

“We have an economy that has evolved, especially in the technology area. I think our tax code is outdated. Frankly, on the business side, we are uncompetitive. I think the president recognized that. It’s not a partisan issue. We are not as competitive as we can be.”