Massachusetts state Rep. Michelle DuBois posted a warning to illegal immigrants on her Facebook page Tuesday about upcoming Immigration and Customs Enforcement raids that are rumored to be taking place in the area.

“I got the following information from my friend in the Latin community: ‘I have a message for the immigrant community of Brockton. Please be careful on Wednesday 29. ICE will be in Brockton on that day.'”

“If you are undocumented don’t go out on the street,” DuBois, who represents the 10th district, added. “If there is a knock on the door of your house and you don’t know who it is, don’t open the door. I ask you to be careful.”

The Democrat included a phone number for immigrants to call if they are detained by ICE. 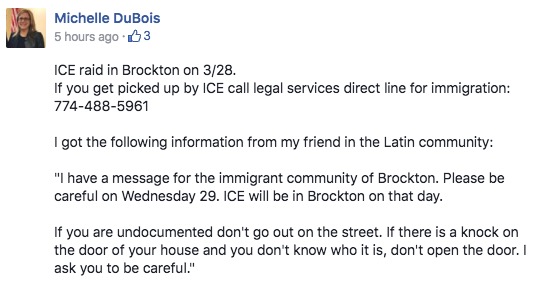 She also followed up her original post with a chart that explains “what to do if ICE comes to your door.” 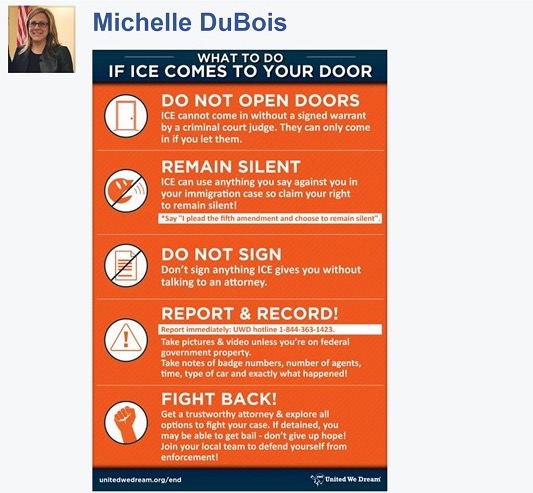 After the original posts, DuBois received numerous comments criticizing her warning to immigrants.

“I am deleting attacks [on the original posts],” she wrote in one response to the criticism. “This post is to inform. Not debate immigration policy. It’s my page and I can delete posts.” 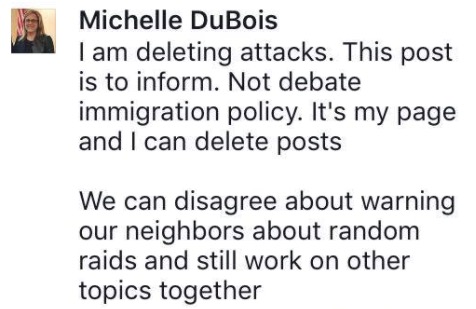 “This post is just to spread awareness of the seriousness of the new immigration policies instituted by Trump,” she wrote in an another response. “It should motivate those who can gain documentation to do so and others who can’t to start making a plan for the safety of their family.” 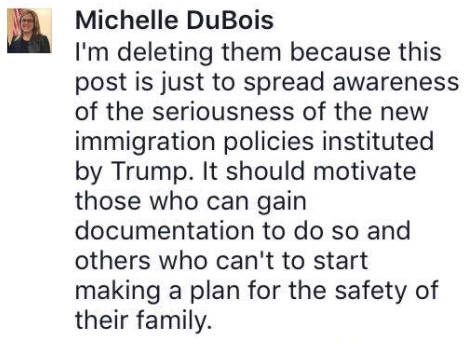 “I can send a message about a rumor to the people who live in my district,” she wrote in yet another. 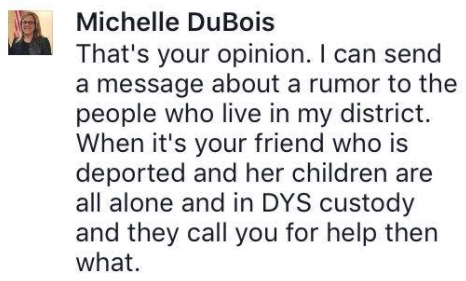 Attempts to contact Rep. DuBois at the phone number listed on her office website instead redirected to the Massachusetts House Committee on Children and Family, where a staffer told The Daily Caller DuBois did not come into the office on Tuesday.

DuBois did supply TheDC with a lengthy statement via email:

I am an elected State Representative and the response to one facebook post has caused people from across the Nation to inundate my facebook page with some pretty ugly and threatening posts. If this is what happens to an elected representative – what must be happening to immigrants every day in our Nation, both documented and not documented.

I posted on my personal and public facebook page about a rumor about an ICE raid happening on two future dates. I had heard this rumor from several immigrants in the community.

There are many people in Brockton (documented and not) as well as people across this Nation who are terrified. This rumor of an ICE raid in Brockton was wide-spread in Brockton. There have been many ICE raids in the City.

Passing information along that is already all-over the community, not only lets the people I represent know what is happening, it lets ICE know that everyone in Brockton is aware of ICE’s planned raid (if there was one).

Having ICE know that this rumor is wide-spread in Brockton allows them to change the date if they feel the public’s knowledge of the raid would undermine their planned raid. So I do not agree with Sheriff Hodgson on his point that he made before a federal panel in WashingtonDC that my public facebook post in anyway undermines law enforcement.”

Massachusetts Republican Party Chairman Kirsten Hughes told TheDC, “Rep. DuBois has demonstrated a complete disregard for her constituents’ safety, and she should be ashamed of these reckless comments.”