Federal officials took six years to plan a new parking lot for a Department of Veterans Affairs hospital in West Virginia that would cost $10 million for only 25 parking spaces, as their solution for a 600-spot shortage.

Then when outside auditors pulled the plug on the fiasco, the hospital’s top official — who had previously served as the facility’s Chief of Staff since 1999 — claimed that it wasn’t his fault because he was new on the job.

Dr. Glenn R. Snider Jr. “didn’t become director of the Louis A. Johnson VA Medical Center until March 2016” so he “wasn’t in charge then” was the takeaway of the local paper, the Exponent Telegram, after speaking with Snider.

“I didn’t run the show then,” Snider told them of the parking lot and seven similarly long-running boondoggles.

Snider’s bio says “he has served as the chief of staff at the medical center since September 1999” and began serving as acting director in May 2015 before it was made permanent last year.

Snider said people should have faith that the waste will stop because the hospital has new leaders, including a new chief of staff — in other words, his replacement in his prior job.

He simultaneously pointed to his own appointment as director as a sign that a new leaf is being turned over, despite nearly two decades in a top role.

While publicly positioning himself as the solution to the problems, Snider privately argued that not all the problems needed addressing by the facility, telling the VA Inspector General IIG) he “disagreed with your conclusion” and “took exception,” blaming the VA regional office above the hospital.

He said he thought the auditors were “inaccurate and misleading” and the “$9.3 million was neither lost, nor misspent”because the project had been aborted, thanks to auditors’ intervention, thus raising the question of why he’s touting himself as the best person to fix a problem he denies exists.

The VA IG published a “Review of Alleged Mismanagement of Construction Projects at the VA Medical Center in Clarksburg, West Virginia” last week, which found that “managers did not effectively manage and oversee” at least eight construction projects, only three of which were completed, and all of which cost “significantly more than planned.

First, the VA forgot to conduct surveys that are a basic part of any new project. Then it only examined bids from two companies, both of which cost more than expected. It agreed to go with one anyway, but took so long to get back to the company that it had already moved on and would only do it for a higher price. Then a competitor of the contractor challenged the VA’s award of the contract.

“In December 2015, the contracting officer stated the anticipated contract only provided funding for an estimated 25 new parking spaces” for the same cost that they had previously expected to create 430. The hospital’s facility management chief — under Snider’s leadership — said they should do it anyway.

The IG’s auditors advised “that spending $9.7 million to increase parking capacity by only 25 spaces did not represent a prudent use of taxpayer funds. Construction of this parking garage as planned would cost approximately $388,000 per parking space. Furthermore, once this project was complete, the VAMC would still not have solved its parking space shortfall of approximately 625 spaces.”

As a result, they canceled the contract and the hospital now has less money than ever to build new parking because it wasted $400,000 pursuing the botched plan. 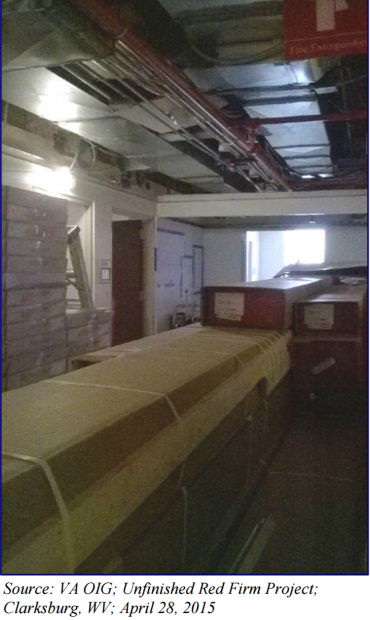 In other projects, West Virginia VA officials set out to renovate a clinic for $360,000, and instead paid contractors more then $1 million before it “terminated the contract for convenience” without completing the work — and left the clinic partially demolished and “unusable for its intended purpose.”

It also set out to spend $8 million renovating its electrical systems, but again failed to do a site survey, so its estimate wound up being far too low.

It then set out to build “two to three” new medical buildings for $5 million–half the cost of 25 parking spaces–but companies’ bids unsurprisingly turned out to be far higher.

Officials said “engineering staff had not received adequate training.” The officials also wildly underestimated the cost of another rehabilitation building and awarded a contract “despite not having sufficient funds.” Another building was delayed 29 months by poor planning.

Some of the projects occurred as far back as 2009, but they kept happening and even the inspector general did not notice them until an anonymous tip from a hospital worker enumerated all the issues in detail for them in 2015.

The hospital would not tell TheDCNF the name of the facilities chief, the person directly responsible for construction, with spokesman Wesley R. Walls responding to the request with an email saying the VA “will continue to be transparent.”

The former director, Beth Brown — for whom the current director served as deputy — was not forced out over the construction projects or serious concerns, including some of the worst wait times in the nation, but simply retired on her own after 38 years of employment in April 2015, saying it was always her long-term plan to retire that year.

The VA often rotates failed employees around to quell discontent about sub-par performance. (INTERACTIVE GRAPHIC: Take A Ride On The VA’s Bad Bosses Merry Go Round)

And failed construction projects with no accountability are a recurring theme.  As of 2015, every major construction project within the VA nationally was months behind schedule and hundreds of millions of dollars over budget, but Glenn Haggstrom, director of the department’s Office of Acquisition, Logistics, and Construction, was paid $20,000 annual bonuses before retiring of his own accord.

A Denver hospital went from $328 million to $1.7 billion, and the VA created a panel to get to the bottom of it–a panel that didn’t include a single person with construction expertise.