WASHINGTON — Sean Spicer held the press briefing from the White House Thursday. The press secretary answered questions on who provided Rep. Devin Nunes with his intelligence information and the president’s reasoning for criticizing the House Freedom Caucus on Twitter. 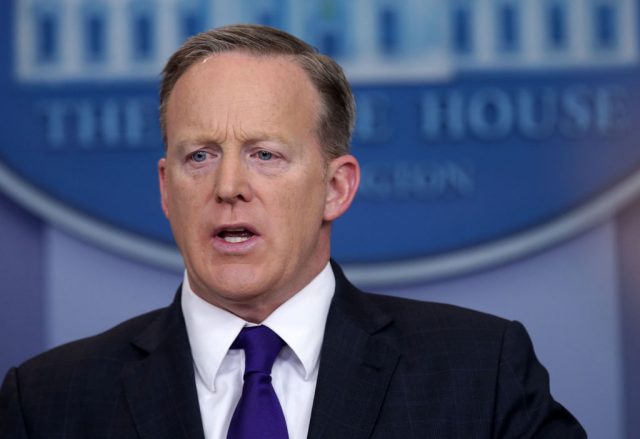 “Your question assumes that the reporting is correct. To comment on story would be to validate things I am not at liberty to do. In the same way you protect sources, Rep. Devin Nunes has opportunity to have his sources. We have sent letter in past few hours to both committees informing them that we want to make that information available to them.”

“It sends a message that we want them to look into this.”

“We are willing to provide the information that we have, and the materials we have come across. Our obligation is to make sure the review is done. I’m not going to comment on reports. I am saying we, meaning the White House, is not going to start confirming or commenting on one-off anonymous sources that publications publish.”

“You continue to look at it from a backwards prism, as opposed to what is the underlying substance — ‘Did something happen? Did leaks occur?’ If you look at [Barack] Obama’s deputy assistant security of defense, she made it clear that it was their goal to spread this information around. They have admitted on the record that this was their goal.”

Has the president been briefed on this information? “I will have to look into that.”

On if Nunes has been floated for a White House position

On the president’s tweet criticizing the House Freedom Caucus

“Of course he understands that the goal of all legislation is get to majority in the House and Senate. At end of the day, he recognizes he has a bold and robust agenda that he is trying to enact, that he ran on. He will get votes wherever he can.

On the Freedom Caucus itself, Spicer said, “There are a few members who have expressed a willingness to want to work with him. I’ll let the tweet speak for itself.”

The Freedom Caucus will hurt the entire Republican agenda if they don't get on the team, & fast. We must fight them, & Dems, in 2018!

“The Department of Justice is reviewing the ruling and considering the best way to defend the president’s order. The White House firmly believes this order is lawful and necessary.”

On the Paris climate agreement

“We are currently reviewing the issues related to the agreement, and we will have decision by the G7 summit in late May-ish, if not sooner.”

On the potential of a government shutdown in April

“We want to maintain our spending priorities and reductions in the 2017 budget. We want to do so responsibly.”