A very challenging Senate map for Democrats in 2018 is pushing Democrats to set their sights on the unlikely possibility of toppling Republican Sen. Ted Cruz from his seat in the conservative bastion of Texas.

Cruz obliterated his Democratic opponent by nearly 1.3 million votes in 2012, and President Donald Trump carried the state of Texas with 52.6 percent of the vote. But Politico reports Democrats think Rep. Beto O’Rourke can beat Cruz in Texas and help deliver Democrats a Senate majority in 2018.

“People want to win and they want to play offense,” O’Rourke said in an interview earlier this month. “And Texas represents that. Texas is how you win back the Senate.”

Senate Majority Whip John Cornyn was quick to point out that the state of Texas hasn’t elected a Democrat to a statewide office since 1994.

Nationally, Democrats are at a disadvantage. Democrats currently hold 46 seats, and there are two Independent senators that often vote with the Democratic Party. In order to obtain a simple majority, they need to pick up at least three more seats than they currently possess.

Normally, that wouldn’t be a problem, but the 2018 map makes Democratic expansion unlikely. There are three seats rated as “toss-ups” by the University of Virginia’s Center for Politics, and they are all currently held by Democrats.

Texas is actually one of the weakest Republican seats on the map. Both Arizona and Nevada are rated as “leans republican,” which means that there’s a greater than even chance of the GOP keeping those seats, and Texas is the third most vulnerable state, and the only state rated as “likely republican.” 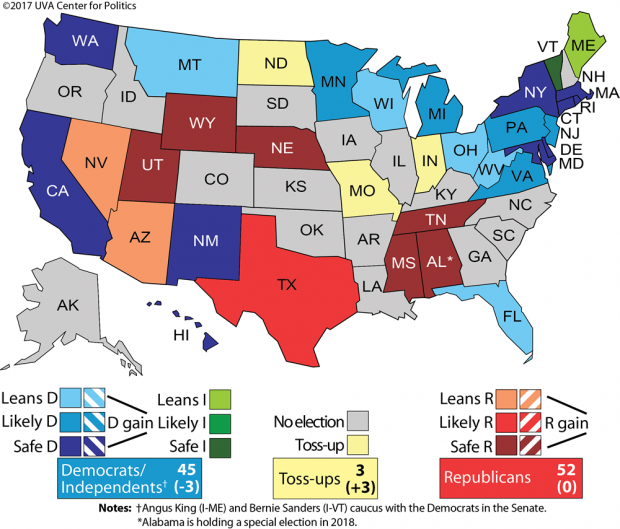 O’Rourke has a solid resume, serving on the El Paso City Council for six years, and as U.S. representative since 2013. Although he’s been elected to federal office twice, his campaign experience is still largely untested.

O’Rourke’s fundraising chops are also up for debate. He was able to win the 2014 race with only $505,000 in contributions, significantly lower than the $1.2 million average fundraising from a winning congressional candidate in 2014. It’s unclear if that lower number is from a lack of fundraising abilities, or if it’s a result of a relatively safe Democratic race.

O’Rourke acknowledged he’s largely untested, but offered his narrow win over Democratic incumbent Silvestre Reyes in 2012 as proof of his campaigning abilities.

Cruz’ political career began in 2012 as well, but the conservative firebrand has managed to make a name for himself as a national force and fundraising savant in the years since. He won the state in 2012 with 56 percent of the vote, after defeating the GOP incumbent in the run-off primary election. Cruz was able to rake in $14,511,279 in the race, and was one of the best-financed presidential candidates, and was one of three that survived the 2016 primary all the way to the Republican National Convention.

Republicans remain highly skeptical that Democrats will be able to win in 2018, comparing O’Rourke’s chances to that of Texas gubernatorial candidate Wendy Davis, who lost in a blowout election.