Have you seen Melania Trump’s official White House portrait? Did it give you pause, but you’re not really sure why? The Boston Globe knows why. 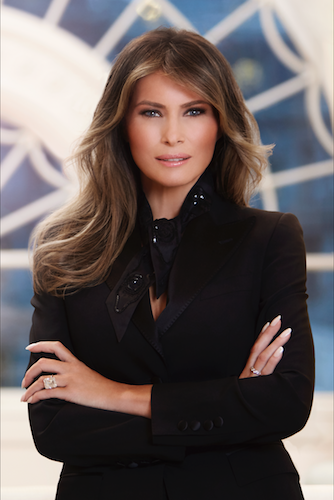 Clearly, this image screams for in-depth analysis, and Beth Teitell at the Boston Globe provides it:

Since the White House released the official portrait of Melania Trump on Monday, social media denizens have been debating the following: What’s the photo’s most unusual feature?

Is it that Trump’s arms are crossed?

“There are different opinions about people crossing their arms in portraits,” he said. “If you do it right, you might add a powerful impression, but it often gives you distance. If you want to be friendly and approachable you probably wouldn’t pose like this.”

Add that to the articles of impeachment, huh?

Oh, how I miss having a First Lady who was friendly and approachable…

People see what they want to see. If you hate somebody so much that you can’t see straight, you’ll look at a portrait of his wife and find problems with it. You’ll see stuff that may or may not actually be there. And then you’ll pretend it’s her problem.

That’s what we call journalism, folks!