Amherst College, a fancypants bastion of the liberal arts in Massachusetts, has stopped using “Lord Jeff” as its mascot and will henceforth begin using “Mammoths.”

Over 7,000 Amherst alumni, over 1,300 current students and about 1,000 professors and administrators participated in a vote to select Mammoths as the official new mascot, according to a school press release.

Mammoths beat out four other finalists — Fighting Poets, Purple and White, Valley Hawks and Wolves — in the vote, which occurred from March 20 to 31.

The old “Lord Jeffs” mascot, which had never been officially recognized, was so-named because Lord Jeffrey Amherst, an English general, founded the surrounding town of Amherst.

Lord Jeffrey Amherst, who was not connected to Amherst College, once suggested using blankets infested with smallpox in wars against Native Americans, notes Inside Higher Ed.

A mascot committee chose Mammoths as a finalist because the animals, which are totally extinct, are “stupendous and monumental.” They “speak to Amherst as fierce competitors.”

“They are delightfully appropriate for competitive teams,” an advocate of the Mammoths mascot said. “I could easily see Amherst with a purple mammoth mascot.”

Amherst charges students a comprehensive fee of $67,620 for just a single year of tuition, room and board. This amount — which is 119 percent of the average U.S. annual household income — is not quite enough, though. The swank school charges another $880 each year for various student activity fees. 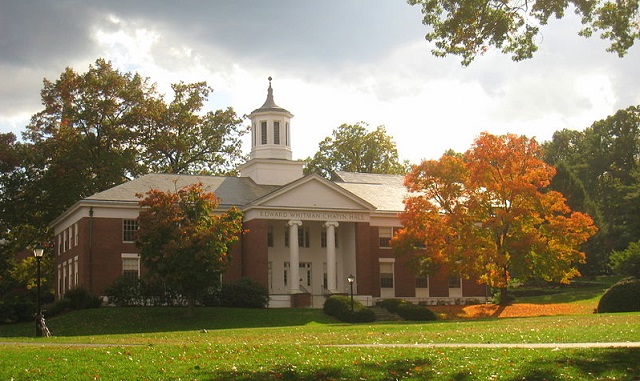 The search for a new mascot at Amherst began in the fall of 2016. The mascot committee received 2,045 suggestions.

The committee thanked members of the greater Amherst community for a “rich and plentiful contribution of mascot ideas” and for “enthusiastic voter participation.”

Amherst is not the only ritzy American college to change its mascot in this politically correct era. (RELATED: Help This Fancypants College Choose A Politically Correct Mascot To Replace MISSIONARIES)

Here are some Amherst alums singing the Amherst school song to commemorate a lost era, as the song will likely disappear now that Mammoths has replaced Lords Jeffs.

Amherst is most famous, of course, because a school administrator distributed a message to dormitory counselors in 2013 warning that randy, wasted alumni would return during homecoming weekend “eager to take advantage of what they now perceive to be an ‘easy’ hook-up scene” on campus. So “keep an eye on your friends, your residents, and yourself.” (RELATED: Amherst College Warns Students That Amherst Alumni Are Probably Rapists)