“He can go back to being a mole for the White House. He still has a job.”

“I got three hours of sleep and accidentally shaved my beard off right before this headshot and I hate it so please make me feel better and tell me I don’t look like a gray whale. Thank you.”  — Noah Schactman, executive editor, The Daily Beast. See the picture here.

“I’m really sick of the ‘Jimmy Walker and Ann Coulter are dating story.’ It’s an old, fake story and every 6 months or so people ask me if it’s true.” — Lisa DePasquale, radio co-host, Political Punks.

“After reading latest NYT piece,the 25th amendment has to seriously be considered. POTUS has real mental deficiencies. Heard he has dementia.” — Rob Reiner.

Ivanka has compassion for atrocities in Syria

“Heartbroken and outraged by the images coming out of Syria following the atrocious chemical attack yesterday.” — Ivanka Trump, the nation’s second first lady.

“For those asking about Steve Bannon’s next play, his talents fit perfectly with running a pro-Trump super pac outside the White House.” — MSNBC “Morning Joe” co-host Joe Scarborough.

Haberman told CNN’s “New Day” that interview with Trump was “surreal” and “genial.”

Chef Marsha Heuberger: “It’s amazing to hear how bad they want to hate him. Can’t stand it if he is ‘genial’. Obama coma still in press.”

Haberman: “This is a massive misread, but that is your choice. Thanks for watching and reading.”

“On my train there’s a man eating a giant corn cob, a man next to me rolling a gigantic joint, & a person is wearing these A train delivers.” — Jessica Naudziunas, BuzzFeed video staffer.

“This is one of those weird plane boarding experiences that feels exactly like the boarding scene in ‘Sully.'” — Amy Dickinson, author of the “Ask Amy” advice column.

“I know this isn’t news but worth repeating: @LGAairport is hands down the worst airport in America. Makes @fly2ohare look good. That’s all.” — Sara Burnett, Chicago-based AP reporter.

— Lee Stranahan, who quit Breitbart for the second time last week after his editor, Matthew Boyle, told him he could no longer attend White House briefings.

“Please be advised that I will be conducting all interviews and coffee meetings on a bench near the House Triangle until further notice.” — Jennifer Steinhauer, congressional reporter, NYT. 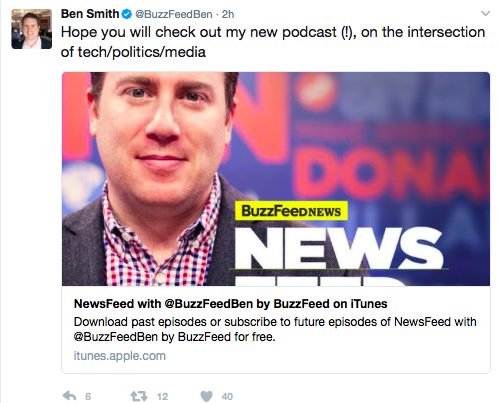