Susan Rice has repeatedly changed her story over the last 15 days and given two different answers about the unmasking of Trump transition officials who were caught up in the surveillance of foreign officials.

Though Barack Obama’s national security adviser at first feigned ignorance, once it was revealed that she was the one who made the dozens of requests seeking to unmask the identities of the associates, Rice defended her actions by saying they were for national security reasons and not politically motivated. 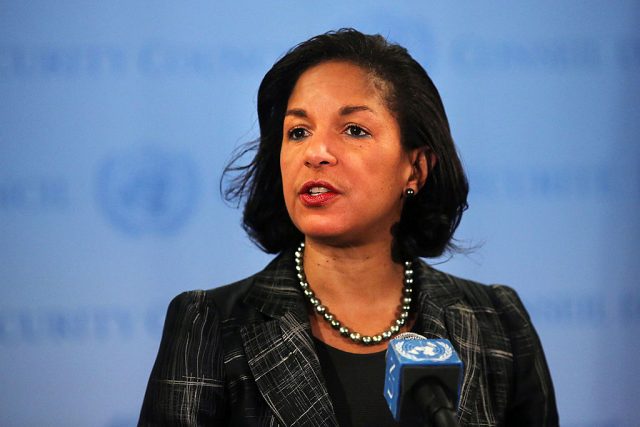 First, Rice lectured the president in an op-ed for the Washington Post published on March 21 over his claims that the Obama administration wiretapped his offices during the presidential campaign.

“The foundation of the United States’ unrivaled global leadership rests only in part on our military might, the strength of our economy and the power of our ideals,” Rice wrote. “It is also grounded in the perception that the United States is steady, rational and fact-based. To lead effectively, the United States must maintain respect and trust. So, when a White House deliberately dissembles and serially contorts the facts, its actions pose a serious risk to America’s global leadership, among friends and adversaries alike.”

Then, after House Intelligence Chairman Devin Nunes revealed that the communications of Donald Trump and his associates may have been swept up in foreign surveillance, Rice was asked if she knew anything about it during an interview with PBS on March 22.

“I know nothing about this,” Rice said. “I was surprised to see reports from Chairman Nunes on that count today.”

“Let’s back up and recall where we had been: the president of the United States accused his predecessor, President Obama, of wiretapping Trump Tower during the campaign. Nothing of the sort occurred. We have heard that confirmed by the director of the FBI who also pointed out that no president, no White House can order the surveillance of another American citizen. That can only come from the Justice Department with the approval of a FISA court.”

“So today, I really don’t know to what Chairman Nunes was referring. He said whatever he was referring to was a legal, lawful surveillance and that it was potentially incidental collection on American citizens. I think it’s important for people to understand what incidental means. That means the target was either a foreign entity or someone under criminal investigation, and the Americans who were talking to those targets may have been picked up.” (RELATED: Rice Requested Intelligence On Trump Associates)

After reports surfaced that she was the official who requested the unmasking, Rice said her intentions were not politically motivated during an interview with Andrea Mitchell on MSNBC Tuesday.

“There were occasions when I would receive a report in which a U.S. person was referred to, name not provided, just a U.S. person, and sometimes in that context in order to understand the importance of that report, and assess its significance, it was necessary to find out or request the information as to who that U.S. official was.”

“It was not uncommon, it was necessary at times to make those requests,” she told Mitchell. “I don’t have a particular recollection of doing that more frequently after the election.”

In that same interview, Rice said she didn’t leak.

“I leaked nothing to nobody, and never have and never would.” (RELATED: Does The White House Want Susan Rice To Testify? Sean Spicer Answers)

The president suggested Wednesday that Rice may have committed a crime, though he failed to provide evidence showing how.

Rice, responding through a spokesman, said, “I’m not going to dignify the president’s ludicrous charge with a comment.”