Trump ordered the strike in response to what the Pentagon believes was a chemical weapons attack carried out by the Assad regime, which left 72 people dead. The video shows the airfield in a northwestern Syrian province where the sarin gas attack is believed to have originated in ruins following the strike. The U.S. launched 59 Tomahawk cruise missiles at the airfield. Scorched aircraft hangars and debris are seen strewn across the airbase in the video. 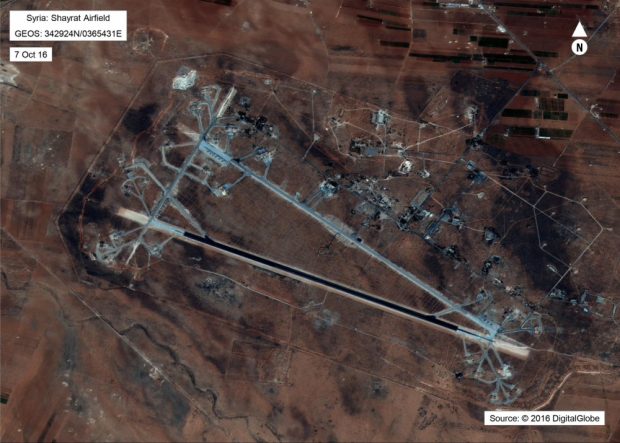 Two Arleigh Burke class destroyers, the USS Porter and USS Ross, located in the eastern Mediterranean launched the missiles. Each Tomahawk carries a 1,000 pound warhead which can be delivered within 10 meters of an intended target. The Tomahawk’s remarkable accuracy and ability to avoid enemy air defenses makes it the weapon of choice for surgical strikes.

Another video purportedly shows Russian drone footage of the results of the attack.

The video shows damaged hangars that appear similar to those in the first video.

“We are assessing the results of the strike,” the Pentagon said in a statement Thursday. “Initial indications are that this strike has severely damaged or destroyed Syrian aircraft and support infrastructure and equipment at Shayrat Airfield, reducing the Syrian Government’s ability to deliver chemical weapons.”