WASHINGTON — Sean Spicer briefed reporters at the White House Monday. Here’s what the press secretary said about the U.S. missile strike in Syria, including the global reaction and Russia’s response. 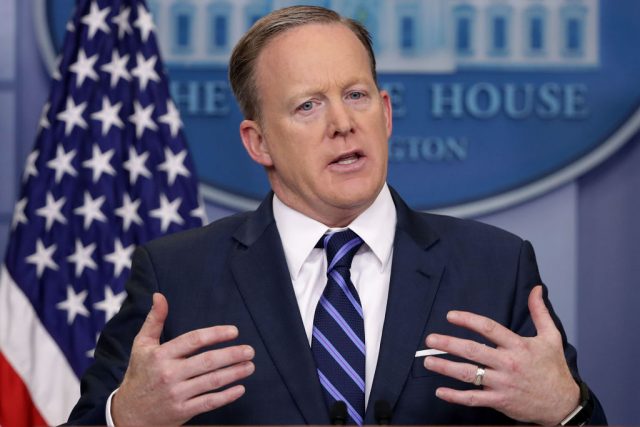 Spicer said the reason the United States took action after the chemical attack was to stop the use of chemical weapons and stop ISIS.

“By us taking action, that’s the greatest thing you can do to support those people. Secondly, we wanted to create areas where we can work with allies including Russia in committing to ensuring there are places that are free from violence.”

“We are ensuring that ISIS is contained and creating environment for change in leadership. You can’t imagine a stable and peaceful Syria with Assad in charge. I don’t think that’s a scenario that’s possible. The bottom line is the first priority is the containment of ISIS.”

“The world saw last week that the president is going to act decisively when it comes to things like that. When you gas a baby, you will see a response from this president.”

On Russia’s response to the strikes

“If you look at the countries that are with us, it speaks pretty loudly. Russia stands with Syria, North Korea and Iran. When you contrast the two sets, it’s pretty clear that we are on the right side of the issue. The action we took last week has been widely praised.

On if the administration thinks Bashar al-Assad committed war crimes

“There is a court that decides those things.”

On what the Trump doctrine is

After a report claimed that White House Communications Director Mike Dubke said there was no Trump doctrine, Spicer said, “The Trump Doctrine is something he articulated during campaign which is that America is first.”

“We are not just going to become the world’s policemen. We have to have a clear and defined interest where we act.”

Spicer said the growth or spread of chemical weapons is “a clear danger to our country and to our people.”

“I don’t think those are mutually exclusive statements. One of them saying we don’t see peace with Assad in power and one says we need to have him gone.”

Can you defeat ISIS with Assad in power? Spicer said, “Yes, sure.”

On Secretary of State Rex Tillerson’s upcoming meeting in Moscow

“There are a lot of things to discuss. We need to remind them of commitments they’ve made, and the commitments Syria has made. There is no question who acted in this case and what Syria did.”

On infighting in the president’s administration

“The president is confident the administration can resolve conflicts. They understand the president’s vision and agenda. He understands we have smart individuals who are opinionated on subjects.”

Spicer added that reports about a feud between Steve Bannon and Jared Kushner are “overblown.”