Eric Trump said the missile strike in Syria last week blows a hole in the narrative that Donald Trump is in Vladimir Putin’s pocket.

“If there was anything that Syria did, it was to validate the fact that there is no Russia tie,” the president’s son said during an interview with the Daily Telegraph. “If they disrespect us and if they cross us, fine. There will be no one harder — he has got more backbone than anybody.”

“We’re no worse off than we were before. Maybe we’re finding that we can’t be.” 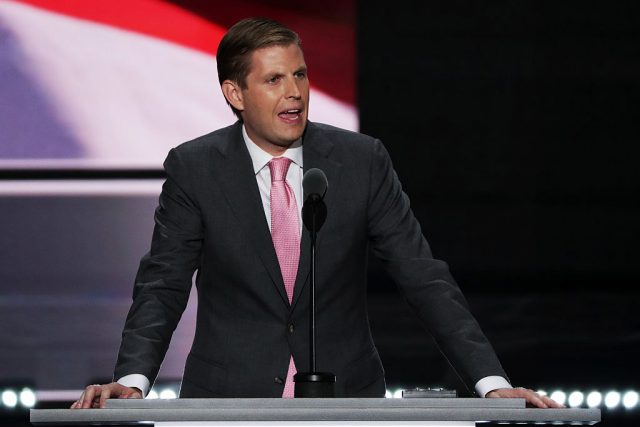 Eric was then asked if his father was concerned about Russia’s response to the strikes. (RELATED: Trump Comments On U.S. Airstrikes In Syria)

“He is not a guy who gets intimidated,” he said. “I can tell you he is tough and he won’t be pushed around. The cards will shake out the way they do but he’s tough.”

He said the president was “deeply affected” by the photos of Syrian children “sprayed down by hoses to keep their skin from burning.”

“It was horrible. These guys are savages and I’m glad he responded the way he responded. Ivanka is a mother of three kids and she has influence. I’m sure she said ‘listen, this is horrible stuff.’ My father will act in times like that.”

“And by the way, he was anti doing anything with Syria two years ago,” he added. “Then a leader gasses their own people, women and children, at some point America is the global leader and the world’s superpower has to come forward and act and they did with a lot of support of our allies and I think that’s a great thing.” (RELATED: Trump’s Approval Rating Remains Steady Following Missile Strike In Syria)