Barack Obama will meet with German Chancellor Angela Merkel in her home country late next month for a panel on democracy.

The two will participate in “Being Involved in Democracy: Taking on Responsibility Locally and Globally,” which is sponsored by both the German Protestant Kirchentag and the Obama Foundation. 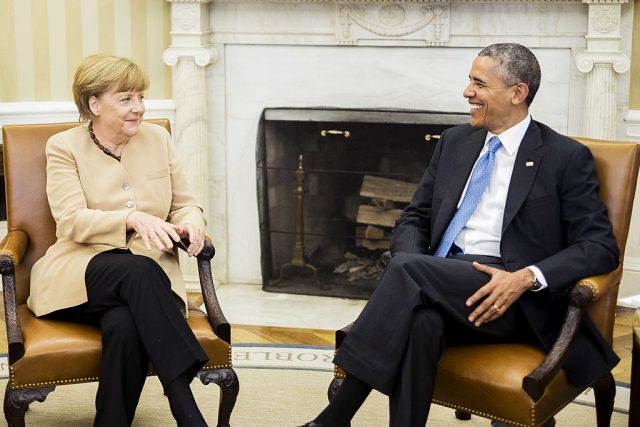 Bishop Heinrich Bedford-Strohm, the chair of the Evangelical Church in Germany, said he invited the former president to the event last year.

“President Barack Obama’s attending the Kirchentag in Berlin, which will ring in the Reformation Summer, underlines the international character of our 500th anniversary celebrations,” Bedford-Strohm said in a statement. “Anyone who is pious also has to be politically minded.” (RELATED: Trump To Merkel: ‘At Least We Have Something In Common’ As Far As Wiretapping)

When Merkel visited the White House in March, Donald Trump told her he believes they have something in common — they have both been wiretapped by Barack Obama.

When a German reporter questioned Trump about his accusations that Obama wiretapped Trump Tower during the election, he turned to Merkel and said, “As far as wiretapping, at least we have something in common, perhaps.”

The president was referring to the 2013 scandal when the German newsmagazine Der Spiegel published a report claiming Obama authorized American intelligence to tap Merkel’s phone after he was briefed by then-NSA director Keith Alexander in 2010. The publication based its claims on a trove of documents leaked by NSA contractor Edward Snowden, and said they were legitimate enough that German intelligence confronted the United States over it. (RELATED: Flashback: Barack Obama Allegedly Wiretapped German Chancellor Angela Merkel In 2010)