The White House has made it clear that it believes there needs to be a change of leadership in Syria, but it has not publicly identified an opposition group that could take power from Bashar al-Assad.

At the end of March, press secretary Sean Spicer said Assad being in power was “a political reality that we have to accept,” but after a chemical attack in the country last week left more than 80 dead, Spicer said he “can’t imagine a stable and peaceful Syria where Bashar al-Assad is in power.” 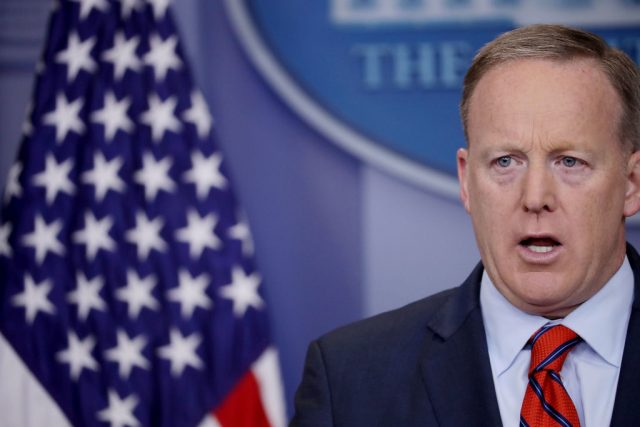 When asked if the administration has identified an opposition party that could come to power, Spicer said this Tuesday.

“I think first and foremost, and I stated this yesterday and I’ll state it again, that our number one goal is to defeat ISIS,” Spicer said. “That is unequivocally the number one thing. Secondly, the political conditions that exist in Syria right now are such that what we need Russia and others to do is help create a political environment in which the Syrian people can choose a leader that is more suited to them.”

“I think getting into who that should be, I think that what we’re trying to do right now is shape the environment to allow the people to determine their outcome.” (RELATED: Rex Tillerson Says ‘It Is Clear’ Bashar Al-Assad Must Go)

The administration has also warned that sanctions against Syria are forthcoming, but Spicer declined to elaborate on what those will look like or when we can expect them.

“I think you know well enough at this point that we are not going to announce any of that kind of action until it’s ready to go,” he said. “I think the president has made it clear that additional action, with respect to Syria in terms of its failure to stop engaging in actions that harm its people, will result in action.”

“We are not going to get ahead of what he is planning. He is not one to telegraph his actions until he’s ready.” (RELATED: The Trump Administration Says Sanctions Against Syria Are Forthcoming)