Corey Lewandowski is the Trump campaign official who introduced Carter Page to the campaign’s policy director, The Daily Caller is told.

Sources tell TheDC that Lewandowski introduced Page to Trump campaign policy director Sam Clovis sometime in late 2015 or early 2016. During the brief encounter, which occurred in New York City, Lewandowski suggested that the two get to know each other. Page, the managing partner of Global Energy Partners, an energy consulting firm, would join the campaign as an adviser several months later.

How Page made his way onto the Trump campaign has lately been a source of growing intrigue. The former Merrill Lynch banker, who has an office in a building next to Trump Tower, has refused to discuss the matter publicly. He dismissed questions about it during interviews this week with CNN’s Jake Tapper and ABC’s George Stephanopoulos. 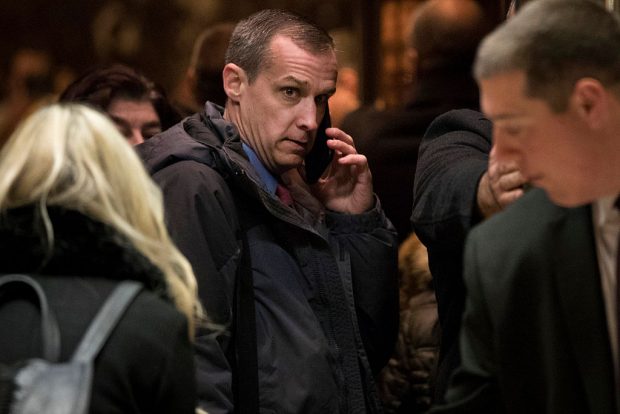 In the interview with Tapper, Page confirmed that Trump campaign chairman Paul Manafort was not his connection to the campaign. And asked if Clovis was his first contact, Page initially refused to comment but said: “He was not the first person that brought me in. I can assure you of that.”

Page gave those interviews after The Washington Post reported on Tuesday that the FBI obtained a federal warrant to conduct surveillance on Page last year as part of an investigation into any illicit ties between the Trump campaign and Russian government. (RELATED: FBI Obtained Surveillance Warrant Against Trump Campaign Adviser)

Page is one of at least four former Trump campaign advisers who are said to be at the center of the FBI’s investigation.

Last month, TheDC reported that Clovis, a former professor and talk radio host, was the Trump campaign official who officially brought Page onto the campaign. But what had been unclear was how Clovis, who now serves as a senior White House adviser for the U.S. Department of Agriculture, came into contact with Page before tapping him for the advisory position.

Former campaign officials who talked to TheDC last month said they were unsure how the two met. One official suggested that Page approached Clovis directly, but multiple sources now say that Lewandowski was the conduit.

Lewandowski’s meeting with Page directly contradicts his repeated insistence that he did not know the foreign policy adviser.

“I’ve never met or spoken to Carter Page in my life,” Lewandowski insisted during a Fox News interview with Jeanine Pirro last month.

Lewandowski did not respond to several requests for comment for this article. A message left with Avenue Strategies, his new lobbying firm, was not returned.

Update: Lewandowski reached out to TheDC after publication and disputed this story.

“I would recall a meeting, most likely. I don’t recall that meeting ever taking place, because I don’t think it ever took place,” he said. “What I’m saying is I’ve never met [Page], and I will testify under oath, to the best of my recollection, I have never met him.”

Page was brought on to the campaign to help fill a bare-bones campaign policy shop, sources have told TheDC. Trump’s team had not prepared for a successful campaign, and as he inched closer to the GOP nomination, an all-out scramble ensued to fill out a roster of campaign advisers.

Trump announced that Page and several other advisers were being brought onto the campaign during a March 21 interview with The Washington Post. Trump also identified energy consultant George Papadopoulos, former Defense Department inspector general Joe Schmitz, and retired Gen. Keith Kellogg as members of the new foreign policy team.

But Trump’s name check of Page has come back to haunt the former reality TV star. The mention left the impression that Trump personally knew Page, but that was not the case, Trump and many White House officials have said.

Trump says he does not recall ever meeting or speaking with Page, who has worked in Moscow in the past and has advised Gazprom, Russia’s largest natural gas company. Some campaign advisers said that though Page was aggressive in his attempts to submit policy proposals, his ideas were never implemented in campaign strategy or its policy framework.

Page officially left the campaign in September amid growing questions about his ties to Russia. In July, he traveled to Moscow to speak at a ceremony for the New Economic School. While in the Russian capital, Page met Russia’s deputy prime minister, Arkady Dvorkovich.

Trump’s detractors pointed to the Page’s visit to Moscow as evidence that the Republican was either too soft on Russia or, worse, in the Kremlin’s pocket. Those allegations have only grown in recent months amid growing evidence that the Russian government orchestrated cyber attacks against Democrat during the campaign.

Page is also mentioned several times in a dossier written by former British spy Christopher Steele. The document, which is still uncorroborated but is in the hands of the FBI, alleges that Page served as the Trump campaign’s liaison to the Kremlin and that he held secret meetings with Kremlin officials and with Igor Sechin, an ally of Vladimir Putin and the president of Russian oil giant Rosneft.

Page has denied holding those meetings and refers to Steele’s document as the “Dodgy Dossier.”

In its application for the warrant, the FBI argued that there was probable cause to believe that Page was working as a secret agent of the Russian government.

The warrant application cited a 2013 attempt made by a Russian espionage ring in New York City to recruit Page. Three spies who were working under cover met with Page and discussed their recruitment attempts. One of the spies called Page an “idiot” who was motivated by money, a sealed January 2015 FBI affidavit states. BuzzFeed News first reported the affidavit earlier this month. (RELATED: Russian Spies Tried To Recruit Carter Page In 2013)

Page says he was not recruited by the spies and that he did nothing improper in his interactions with them. He has acknowledged giving some documents to the men but says the papers were from lectures he has given at New York University.

FBI and Justice Department officials sought the warrant only after Page separated from the campaign, The New York Times reported on Wednesday. The officials waited to seek the warrant in order to not be seen as intervening in the presidential campaign, sources told The Times.

Lewandowski has had at least one other documented interaction with Page. He was the campaign official who gave final approval to Page’s visit to Moscow.

Lewandowski reportedly informed Page that he would have to take the trip in his personal capacity and not in affiliation with the campaign.

This article has been updated with comment from Lewandowski.