If any outlet is going to know how Ivanka Trump and her husband, Jared Kushner, are spending Passover, it’s a safe bet that Jewish Insider has located the White House afikomen.

They spent the opening days of Passover at a Four Seasons in Canada.

The Mirror has learned that the hotel is indeed kosher for Passover. The five star resort has been purposely transformed by a special group of outside organizers for the hotel to accommodate the Jewish holiday.

“It has been made that way specifically at this time of year,” a hotel receptionist told me by phone. When transferred to “Ella,” another receptionist, for more detail, she explained, “During this holiday there’s a special group in house so it’s done by an outside party. The entire hotel is completely booked out by the organizer…to do this service for the kosher community.”

JI reports that Ivanka’s Twitter picture of the fam at the White House was deceiving in that it made people think she was spending the holy holiday here in Washington. The pub pointed out that The Jerusalem Post falsely concluded that the picture proved that the couple were spending Passover at the White House. 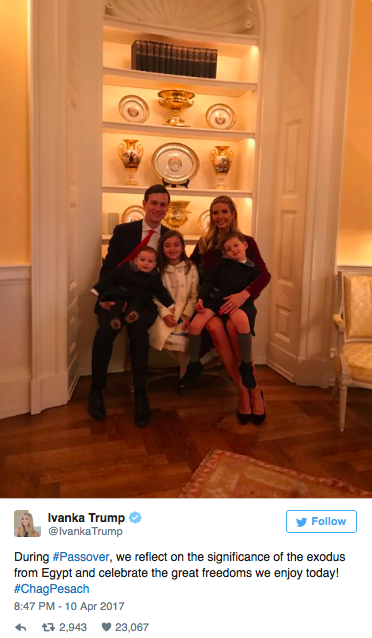 Instead, the high power couple who allegedly run the White House are in Whistler, a vacation hot spot in British Columbia, Canada.

Is this a chance for President Trump‘s chief villain Steve Bannon to slide back into the president’s good graces if he, in fact, isn’t already there? In recent days, people close to Bannon have been anonymously telling reporters that he’s on the outs with the president. Certainly, Trump’s quote about him to the New York Post doesn’t indicate any particular closeness between the two men.

“I like Steve, but you have to remember he was not involved in my campaign until very late,” Trump told NYP reporter Michael Goodwin. “I had already beaten all the senators and all the governors, and I didn’t know Steve. I’m my own strategist and it wasn’t like I was going to change strategies because I was facing crooked Hillary.”

JI has a picture of Ivanka in ski gear on her cell phone at the Four Seasons hotel buffet from Monday night. It came just hours before the first Seder.

The pub speculated that the couple may meet with Canadian Prime Minister hotty Justin Trudeau, but there’s absolutely no reason to think this is happening.