WASHINGTON — Sean Spicer briefed reporters at the White House on Thursday just minutes after news broke that the U.S. military dropped the “mother of all bombs” for the first time in Afghanistan. 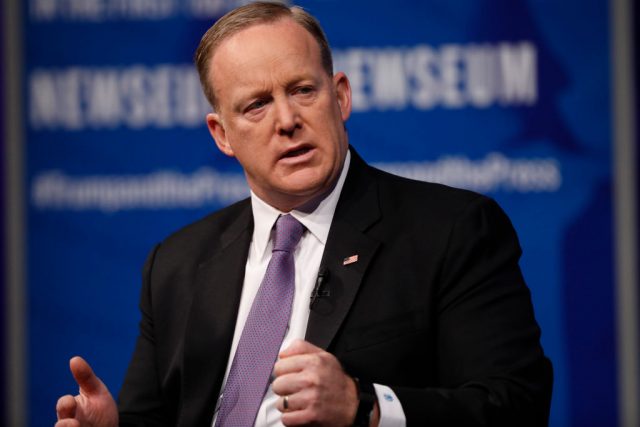 “AT 7 p.m. local time the U.S. military used GBU-43,” Spicer said. “It is a large, powerful and accurately delivered weapon that was used to targeted a system of caves and tunnels that ISIS uses to travel around in.”

“In order to defeat the group, we must defy them operational space, which we did.”

Though pressed repeatedly for details, Spicer referred all other questions to the Department of Defense.

On shifts in the president’s stance on multiple issues, like NATO and whether China is a currency manipulator

“I think you can look at what you’re referring to as a shift in multiple ways,” Spicer said. “Those entities are evolving towards the president’s position.” He said they are “moving towards what he has been calling for.”

“He laid out two clear positions on NATO and started to recognize that the institution is moving towards his position.”

Which of the president’s positions are non-negotiable? “There’s always gonna be areas where it depends on the outcome.”

On his changed stance towards China and Xi Jinping

“The president’s tough talk [on China] was to get results for the people.”

Does he still feel China is a currency manipulator? “I think that is a complex issue and I’m going to leave it to the president to answer that.”