The other day I expressed the opinion that both United Airlines and Dr. David Dao share the blame for what happened on that flight everybody’s talking about this week. Apparently some people didn’t like that, which is fine. But some of those people have been spreading fake news about the incident, which is not fine. Facts are facts. “The media smeared the wrong David Dao” is not, in fact, a fact.

No, the news media did not get the wrong David Dao.

Angry allegations have been flying across social media on Wednesday, charging that local and national news outlets misidentified Dao, an Elizabethtown, Ky., physician, as the passenger that security dragged off a United Airlines flight on Sunday.

The Internet rumors stated that the real David Dao who was pulled off the flight was actually from Louisiana, where records and Google searches show there is a second man by that name who practices medicine…

“That is totally wrong, yeah,” said a receptionist who answered the phone at the office in Elizabethtown where Dao’s wife works. She confirmed that, yes, the Elizabethtown David Dao is the same David Dao who was on the United flight.

So it turns out this guy was wrong: 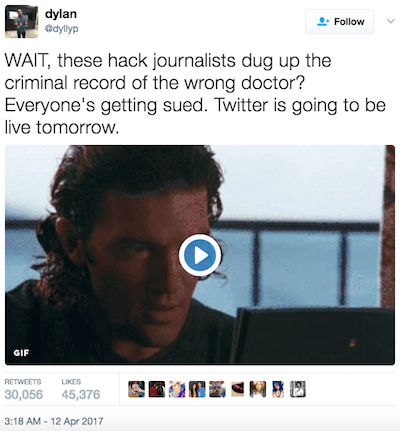 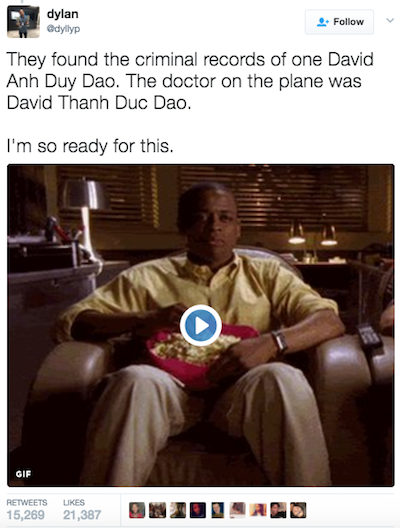 It’s cool that the tweets with the funny animated GIFs got thousands and thousands of retweets and likes, but the original story about Dr. David Dao is still true. Those people’s snap judgment about what happened was hasty. The cognitive dissonance they felt when they got new information about it was uncomfortable, so now they’re seizing on anything that tells them they were right all along. Well, they weren’t. They were wrong. And they wonder why there’s such a lucrative market for fake news!

As the brilliant author Philip K. Dick once said: Reality is that which, when you stop believing in it, doesn’t go away.

If you don’t think David Dao’s drug-related offenses and losing his medical license are relevant, then you can make that judgment call. But that doesn’t mean it didn’t happen. That doesn’t mean reporters should be ashamed of getting a story right for once.