Facebook announced Friday that the company has discovered and dismantled a network of fake accounts that have been rising on the site over the last six months. The result of that purge has caused tremendous damage to one news outlet’s Facebook page in particular — USA Today.

In its statement, Facebook announced that the latest purge of spammers could bring down follower counts among 99 percent of large publisher pages by less than three percent.

It appears no major outlet has been affected by the purge more than USA Today.

The newspaper has already lost five million followers from its primary Facebook page by the end of Friday.

“The apparent intent of the campaign was to deceptively gain new friend connections by liking and interacting primarily with popular publisher Pages on our platform, after which point they would send spam,” Facebook said in a statement. “We observed that the bulk of these accounts became dormant after liking a number of Pages, suggesting they had not been mobilized yet to actually make connections and send spam to those people.”

According to data from CrowdTangle, USA Today had 15.2 million likes Thursday and has dropped to 10.2 million — a fall of 32.38 percent. Likes were falling from USA Today’s page at a blistering pace Friday, with thousands of followers disappearing every minute.

No other major publisher appears to have experienced the same drop.

Outlets like The Washington Post, The Los Angeles Times, The New York Times, The Daily Caller, Fox News, and CNN all lost followers after Facebook’s announcement. These pages,however, experienced a drop of less than three percent, as Facebook predicted.

USA Today provided The Daily Caller with a statement after publication which said that the newspaper had contacted Facebook about the fake accounts.

“USA Today Network takes great pride in our journalism and the trust our consumers and advertising partners have in us. We have been in close communication with Facebook since presenting this issue to them and look forward to a swift solution that prevents this illegitimate activity from happening on our Facebook page in the future,” Maribel Wadsworth, chief transformation officer, USA Today Network and Gannett, said in the statement.

Facebook told TheDC: “We don’t know why specific Pages were targeted, but we are grateful to our partners like USA Today for assisting us in our efforts to stop this spam operation.”

The newspaper, owned by Gannett, has experienced tremendous growth on Facebook in the last six months, representing a true anomaly in the industry. The newspaper more than doubled the nearly 6 million followers it had in late September.

The New York Times and the Washington Post each added under 2 million followers in the same time frame, while the LA Times grew by about 300,000 followers. 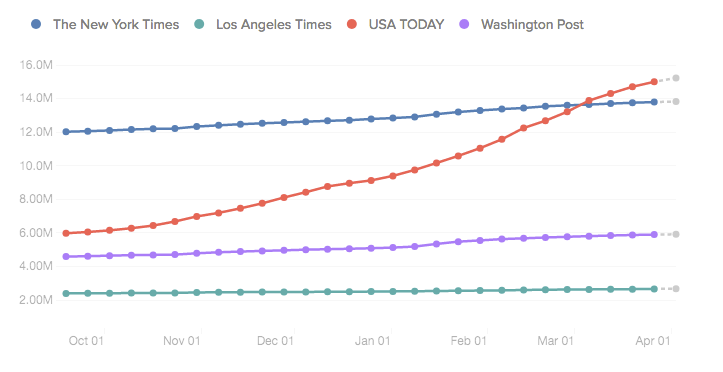 Publishers are able to advertise for likes on Facebook, but the social media company’s statement Friday noted that none of the likes being purged “were the result of paid ads.”

The then-head of social media content and strategy for USA Today, Jamie Mottram, proudly tweeted in January that his outlet was the “fastest-growing FB page in news.”

USA Today’s own coverage of the Facebook announcement points out that fake page likes can potentially be used to make businesses “more popular on the site and also potentially to boost their rankings on search engines.”