Minneapolis Muslims are upset with a man patrolling the neighborhood of Cedar-Riverside who’s attempting to impose what he calls “the civil part of the sharia law.”

The Minneapolis Star Tribune reported Thursday that Abdullah Rashid moved from Georgia to the area last year. He began traversing the mostly Somali residential community and began imploring locals to not drink alcohol or intermingle with the opposite sex.

Additionally, he tells Muslim women he thinks are not appropriately dressed to wear traditional Islamic garb for their gender. Rashid told the Star Tribune he is bringing in others to help him do these rounds through the neighborhood.

However, local Muslim leaders say they do not want Rashid or his group, General Presidency of the Religious Affairs and Welfare of the Ummah, engaging in such activity and contacted local police.

“What he’s doing is wrong and doesn’t reflect the community at all,” said Jaylani Hussein, executive director of the Minnesota chapter of the Council on American-Islamic Relations (CAIR). 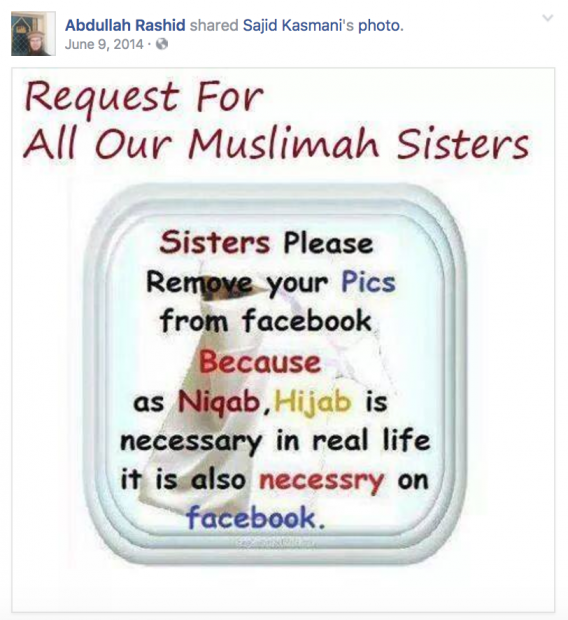 The Star Tribune reports Minneapolis police received reports in February from residents who say that Rashid wore a dark green uniform that said “Muslim Defense Force” and “Religious Police” that had two flags related to ISIS and other terrorist groups.

“We’ve had conversations with community members that live over there,” said Officer Corey Schmidt, a police spokesman. “Sometimes it takes a little bit of time to deal with it, but it’s something we’ve been monitoring.”

Rashid, previously known as Devon Miller, converted to Islam in 2009, KRIS TV reports. He told local media he created his shariah law enforcement organization in 2013. Rashid says he wants to transform Cedar-Riverside into a “sharia-controlled zone” where Muslims would learn what he called the proper practices of Islam, and that “non-Muslims are asked to respect it.”

The Islamic Institute of Minnesota released a statement criticizing Rashid, saying that he “does not in any way speak for…the Muslims in Minnesota.”