The U.S. dropped the “Mother of All Bombs” on ISIS targets in Afghanistan last week, which served as a reminder that America has been engaged in the Middle Eastern country for more than 15 years.

Since invading Afghanistan in October 2001, 2,217 American troops have died, including one just over a week ago, as the U.S. continues to fight against the Taliban, al-Qaida and ISIS forces. Two foreign policy experts The Daily Caller spoke to Monday said that without a strong military commitment in Afghanistan, the U.S. will lose the war.

There are currently an estimated 8,400 troops in Afghanistan training and advising the Afghan army and conducting counterterrorism operations. Gen. John Nicholson, the commander of the international coalition in Afghanistan, told senators in February that the U.S. is currently engaged in a stalemate and a “few thousand” more troops are required to solve it.

Stephen Biddle, a professor at George Washington University and a member of the Council of Foreign Relations, told TheDC that the U.S. will need much more troops to win in Afghanistan — around 100,000. “If you’re willing to do that, you could drive the Taliban to a settlement that looked like victory by us and a surrender by them,” Biddle said. 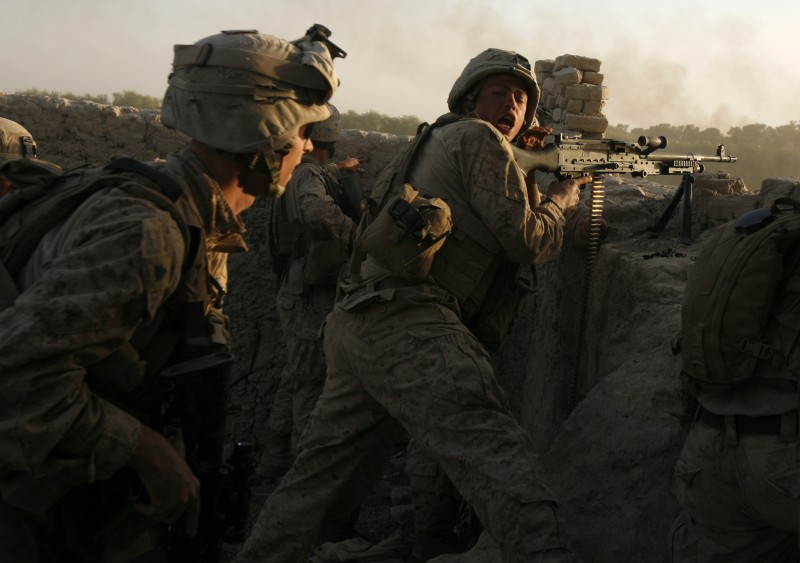 U.S. marines fire during a Taliban ambush as they carry out an operation to clear an area in Helmand province, October 2009. REUTERS/Asmaa Waguih

President Trump didn’t speak much about the War in Afghanistan in his run for office, and his “America First” foreign policy stance has Biddle doubtful that the Trump administration would be willing to deploy that many troops. Biddle said that the most likely outcome is that “we muddle through and eventually either Congress defunds this or the Afghans collapse and we lose outright.”

Michael Pregent, an adjunct fellow at the Hudson Institute and former intelligence adviser to retired Gen. David Petraeus, echoed the need for the U.S. to commit militarily in Afghanistan.

“The only way to effectively win in Afghanistan is not announce a withdrawal and find a way to stay,” Pregent said. The veteran intelligence officer said that the announcement of a withdrawal “negates” a surge. He added, “you can’t give a patient enemy like the Taliban an end date, they just wait you out.”

He said he “absolutely” agrees with Gen. Nicholson’s call for thousands of more troops to be deployed to Afghanistan, as the U.S. doesn’t “have enough to train and advise” the Afghan military. Pregent continued on to state that while staying in Afghanistan is “controversial, we stayed in Japan, we stayed in Germany, we stayed in South Korea.”

As for the White House’s plan for Afghanistan, spokeswoman Sarah Huckabee Sanders told TheDC that the administration would follow up to an inquiry about how long the U.S. plans to stay and what it hopes to achieve in the Middle Eastern country. The Daily Caller has not received a follow-up as of publication time.

1
Here's How This Pro-Beijing Outlet Made It Into The White House Coronavirus Press Briefing
US
2
'That Is A Lie!' Joe Scarborough Goes On Screaming Rant At Networks – Including His Own – For Not Fact-Checking Trump During Live Press Briefings
Media
3
'Give Me The Price': Trump Ignores Journalist For Not Knowing Oil Costs
US
4
Bernie Sanders Drops Out Of Democratic Presidential Race
Politics
5
WHCA Takes Another Swipe At OANN Reporter For Breaking White House Distancing Guidelines
US