Donald Trump will sign an executive order in hopes of favoring American workers by reforming the H-1B visa program and minimizing exceptions to the Buy American Act of 1933, which requires the federal government to favor U.S.-made products when funding projects.

The president is scheduled to sign the two-part order — Buy American and Hire American — after delivering remarks at a tool manufacturing company in Wisconsin Tuesday. 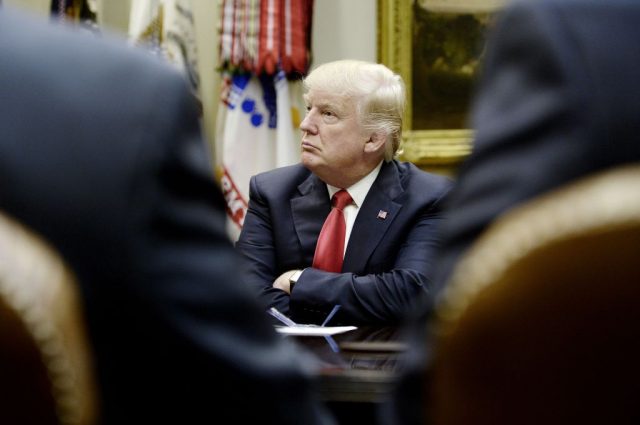 The first part of the executive order — Hire American — seeks to enforce the H-1B visa program so it “serves the national interest” by awarding visas to the most-skilled and highest-paid applicants without bypassing American workers who are qualified for those jobs.

“For too long, rather than operating as designed and allowing only the best and brightest to come in and fill key positions, the H-1B nonimmigrant visa program has been administered in a way that harms American workers—specifically, it has led to a flood of relatively low-wage, low-skill workers in the tech sector,” the official said.

“Our goal is to ensure that U.S. workers who are just as qualified, willing and deserving to work in these fields are not ignored or otherwise unfairly disadvantaged in the H-1B process.”

“We are saying to these agencies, ‘Tell us everything you can do.'”

The official said the review could result in proposed legislation or administrative changes, like increasing applications fees for H-1B visas.

The second part of the order — Buy American — instructs the same agencies listed above to favor American-made goods and services when using taxpayer dollars on federally-funded projects, while minimizing waivers and exceptions to the Buy American law.

Meant to root out “every single Buy American loophole,” it instructs the agencies to conduct a “top-to-bottom” performance review of how they grant waivers and exceptions. Secretary of Commerce Wilbur Ross will then review those findings and submit a report to the president within 220 days.

“Buy American is the Trump Administration’s highest priority when it comes to spending taxpayer dollars,” a senior official said. “Agencies have their clear marching orders, and they will be held strictly accountable for any failure to fulfill the Buy American mission. This order directs every agency to scrupulously monitor, enforce, and comply with Buy American laws.”

The administration said it believes the Buy American law is weakened by the excessive granting of waivers and exceptions.

“Going forward, public interest waivers in particular shall be more narrowly construed; and the granting of such waivers will be elevated to the heads of the agencies to insure greater accountability.”

The second part of the order also calls for a review of trade deals that have waived Buy American laws “to determine which deals may actually be working for America and which are not.” Ross and the United States Trade Representative will “comprehensively assess the effects of each of the relevant agreements to determine whether these agreements do indeed meet President Trump’s standard of being both fair and reciprocal.”

With this executive order, the senior administration official said Trump is “turning the Republican party into a vehicle that broadly represents working class citizens who feel underrepresented by the political class.” (RELATED: Why Hasn’t Trump Followed Through On His Promise To Get Rid Of The H1B Visa And DACA Programs?)