After Geraldo expressed glee after President Trump sent the “Mother Of All Bombs” to Afghanistan, Oliver ripped the longtime Fox News correspondent on his Sunday night show.

On Friday, Geraldo spoke of a school bully he endured named “Richie.”

“You know, I had a bully in high school,” he explained. “A guy named Richie. You never knew what Richie was gonna do. He had a temper. Sometimes he’d want to kill ya and sometimes he’d let ya go. …I like that they think Donald Trump is like Richie from my high school. I want the bad guys to think that he could.”

Geraldo praised Trump’s act of war. “One of my favorite things in the 16 years I’ve been here at Fox News is watching bombs drop on bad guys,” he said.

Oliver responded by wishing for something completely terrible to happen to Geraldo’s facial hair.

“Oh, that’s a coincidence, because one of my favorite things in four seasons on this show is getting to look directly into the camera and say, ‘F–k you, Geraldo,'” he said on his program. “I hope your mustache gets caught in a box fan.”

On Monday, Geraldo fired back at Oliver.

But it was weak and way too serious.

Unfortunately, he didn’t address Oliver wanting to destroy his stache. 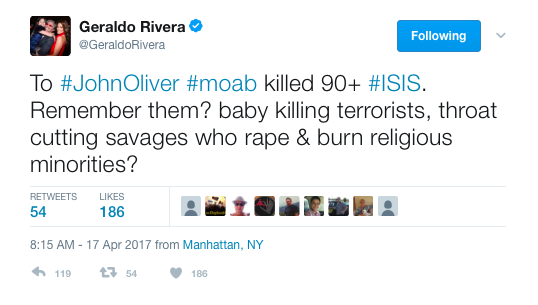