COLUMBIA, S.C. – The Richland County Sheriff’s Department (RCSD) has a new high-tech weapons-system that will provide more accuracy, flexibility, and situational control during RCSD special operations going forward. The weapon – a Tracking Point M600 service rifle, now part of the inventory of the RCSD Special Teams Division’s snipers – is designed to replace the U.S. military’s M4A1 service rifle. The M4 is the carbine version of the M16A2 assault rifle.

Like the M4 and the M16, the M600 is a 5.56-caliber automatic rifle which is built on the old M16-design platform. Where the weapon differs is its optics (and, yes, price).

According to Tracking Point, the rifle and primarily the scope are wired with a “target elimination fire control system to automatically acquire and eliminate enemy combatants.”

How? The M600 has an image-stabilizing, target-acquisition feature wherein the shooter is able to look through the scope, quickly adjust his or her range and focus with a side-mounted toggle switch, acquire the sight picture, squeeze the trigger, hold the trigger, and hit the target even if it is moving. Simply put, the shooter can lock onto a target moving at 15 mph and hit that moving target at a distance of out to 600-plus yards.

The rifle’s target-acquisition feature may also be disengaged for conventional use. And it is extremely accurate [as this writer, a former U.S. Marine multi-times expert rifleman will attest] in conventional mode as well.

Accurate, but not cheap. The M600 costs nearly $10,000. That’s $1,800 for the rifle with traditional iron sights, and well over $8,000 for the scope. Acquired as a gift – one rifle each for the RCSD and the West Columbia Police Dept. – from a U.S. Army veteran who wished to remain anonymous, the rifle is zero cost to taxpayers.

“This weapon speaks to the Sheriff’s commitment to pursuing technology as a means of dealing with any possible threat to both our communities and our deputies,” says RCSD Deputy Chief Chris Cowan, commander of special teams (including the Special Response Team, snipers, and other units).

Deputies and other RCSD officers say the M600 will greatly enhance the RCSD sniper team’s capabilities. Though the numbers are undisclosed, the RCSD sniper team is equipped with a variety of weapons, including several FN (Fabrique Nationale) rifles in .338 and .308 caliber.

“This is an important addition to our inventory,” says Richland County Sheriff Leon Lott. “I don’t ever want us to be in a bad situation where we could have benefited from a technology like this and didn’t have it.”

Lott served as a sniper on an early RCSD special weapons and tactics (SWAT) team, some 40 years ago.

The M600 rifle was unveiled yesterday during officer test-firing and media familiarization-firing at the RCSD firing range in Columbia. 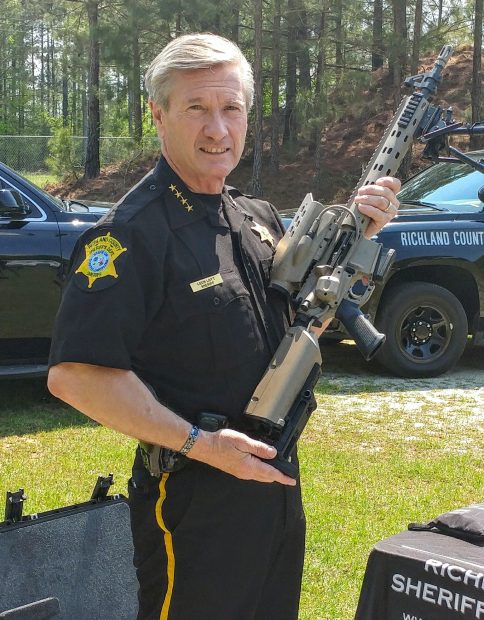