Rebecca Gomez Diamond, a former contributor at Fox News and Fox News Business, got a big boost to her self-worth.

Not only did she previously receive a payout from Bill O’Reilly for alleged sexual harassment, but on Tuesday she got to see him officially leave the network under a cloud of shame after several weeks of new, noisy accusations of harassment that made it impossible for the network to keep him.

This is the second time that Diamond has spoken out this month about what allegedly happened to her when she worked for Fox News. And technically, “merit” means deserving of praise or a reward.

On April 5, President Trump drew her ire after he told the New York Times that he doesn’t think O’Reilly did anything wrong. He said O’Reilly should not have settled the various sexual harassment lawsuits that were brought against him during his storied career at Fox News.

Diamond was furious and blasted the leader of the free world on Twitter. 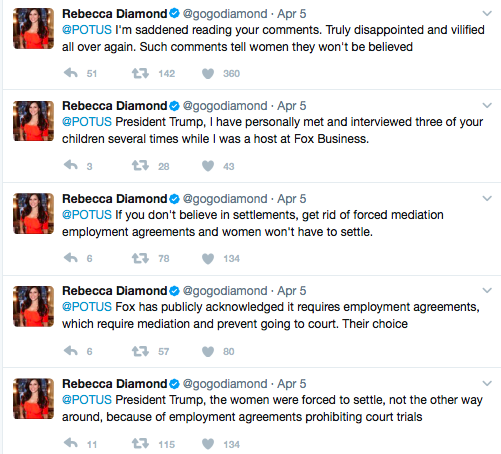 As reported by the NYT, Diamond left the the network in 2011 after telling superiors that she had recordings of O’Reilly saying sexually explicit things to her.

She was reportedly under a confidentiality agreement that she has obviously now broken.