A Democratic Party spokeswoman said Wednesday that Republican Utah Rep. Jason Chaffetz’s decision not to seek re-election “raises questions” about whether Russia has dirt on him.

Adrienne Watson, the Democratic National Committee’s deputy communications director, retweeted conspiracy theorist Louise Mensch’s tweet that said, “Sources say there is kompromat on [Jason Chaffetz]; that this is why he turned and the [FBI] know it.”

Kompromat is a Russian term which means compromising material used to force someone to work for Russia.

In her retweet, Watson wrote, “Chaffetz not seeking re-election will raise more questions about this.”

Mensch is well-known on Twitter for spreading conspiracy theories regarding Russia. She has previously said that Russian President Vladimir Putin may have killed conservative journalist Andrew Breitbart, and that Anthony Weiner was actually sexting with Russian hackers, not a 15-year old girl. 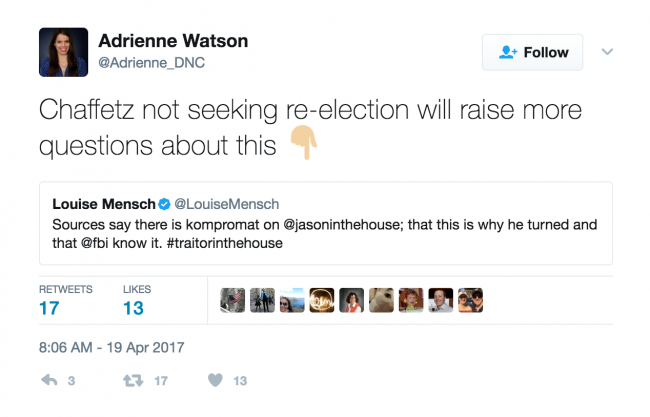 Watson’s promotion of a conspiracy theory was also retweeted by another Democrat staffer Joel Kasnetz. Chaffetz said he was not seeking re-election as he has “long advocated public service should be for a limited time and not a lifetime or full career.”