I barely had time to shrug at the news that Bill O’Reilly was out at FNC when I burnt my hand on this hot take from Katy Tur at MSNBC.

“They’ve got three white men. Or they had three white men — Bill O’Reilly, Tucker Carlson, Sean Hannity — in their primetime lineup… [Does Fox News have] a responsibility to vary it up now, bring another woman in, maybe somebody who is not a white man?”

The obvious answer is: Of course. How could they not?

After all, just look at how diverse the MSNBC lineup is: 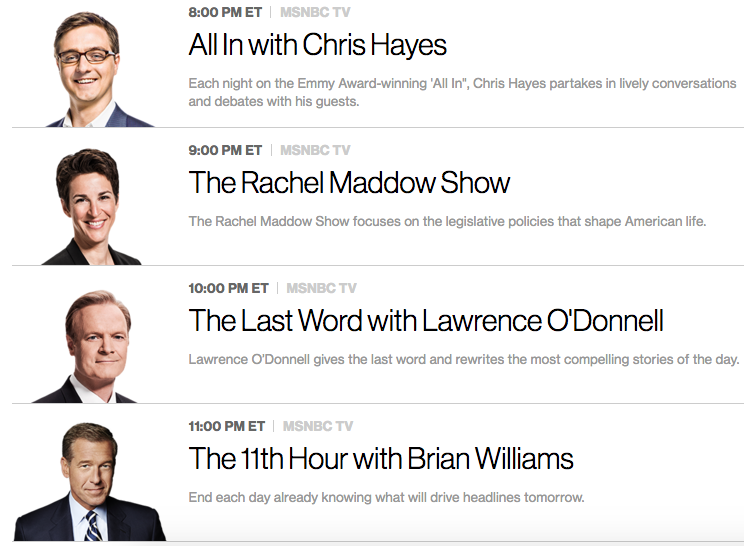 See? They’ve got a white woman in there. And she’s a member of the LGBT community, at that. This is the sort of commitment to diversity that has made MSNBC the second- or third-rated channel in all of cable news. Anything else is just plain irresponsible.

Unfortunately for Katy Tur and everyone who thinks like her, Fox News has chosen the evil white male Tucker Carlson to take over at 8 PM. Did I mention that he’s both white and male? What’s up with that? Um, it’s 2017, people!

Remember, race and gender are merely social constructs. That’s why all you white males need to shut up.

BTW, Ms. Tur: Up until a few months ago, Megyn Kelly had a primetime show on Fox News. Then she moved to NBC, where she’ll take over the timeslot formerly occupied by this woman:

So let’s hear some more about diversity.