The black supremacist who murdered four white men in Fresno, Calif. this week laughed during his police interview about the slayings, Fresno’s police chief says.

“When he spoke about the shootings, he did so in a very callous manner,” Chief Jerry Dyer said in a press conference Wednesday of Kori Ali Muhammad, the 39-year-old killer. “In fact, multiple times he laughed as he described what transpired.”

Muhammad killed three white men in downtown Fresno on Tuesday. His first victim that day was Zackary Randalls. Muhammad shot the 34-year-old while he was sitting in his work truck. Muhammad then shot Mark Gassett just after the 37-year-old had picked up groceries at Catholic Charities. He then gunned down 58-year-old David Jackson in the Catholic Charities parking lot.

Muhammad, who is Muslim, shouted “Allahu Akbar” — Arabic for “God is great” — during his arrest following Tuesday’s shootings, though Dyer says the killings were not considered a terrorist act. Instead, the shooter was motivated by anti-white hatred.

A convicted felon with drug and weapons offenses on his record, Muhammad frequently expressed racist sentiment on his various social media accounts.

He posted about black separatism and reparations for slavery on Facebook and Twitter, and also expressed support for the Black Lives Movement and its leaders, including activist Shaun King. (RELATED: Racist Shooter Targets Whites In Fresno)

The shooter’s hatred for whites is also prominent in rap videos he recorded for YouTube.

“Justice for my black kin, hollow point(s) [bullets] make a white devil body spin,” he rapped in one video posted to the site last month.

“Kill a racist devil dead, cut of they head, put a bullet in they head, and get that bread,” Muhammad continued. 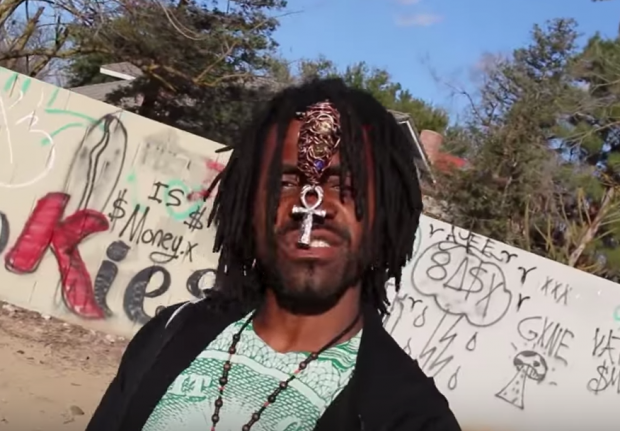 Kori Ali Muhammad in video for “U Gone Need Me.” (Youtube screen grab)

During Wednesday’s press conference, Dyer said that Muhammad planned to kill as many white men as possible and blamed that demographic for problems in the black community.

“Once he saw he was wanted for murder, he said he was not going to go down for shooting a security guard…he was going to kill as many white males as possible,” he said. “He said he didn’t like white men and white men were responsible for keeping black men down.”