The North Carolina Board of Elections released Friday a report detailing the number of people who cast votes illegally  in 2016, and Democrats comprised over 60 percent of those who voted illegally.

According to the report, 441 were felons serving active sentences, 41 were non-citizens, 24 voted twice, and 2 voted under the names of dead family members.  Nineteen other cases of individuals voting under other people’s names are currently being investigated.

The total number of confirmed cases of voters who cast their ballots illegally comes out to 508. 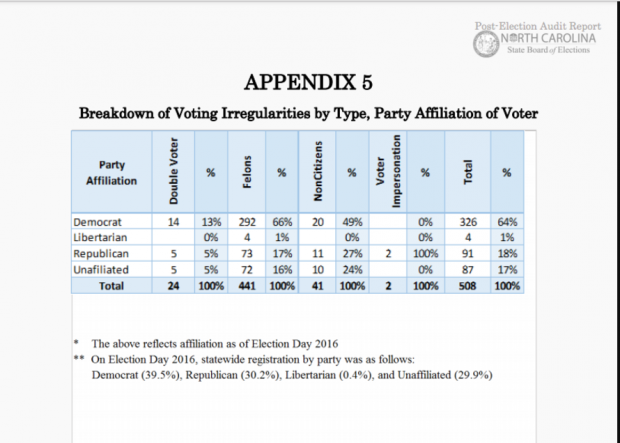 NC Board Of Elections:  Voting Irregularities 2016

Of the 41 people who cast ballots and were non-citizens, 20 were Democrats, 11 were Republican, and 10 were unaffiliated.

Finally, two individuals affiliated with the Republican Party were found to have impersonated another voter when casting a ballot.

“This audit is a positive step in identifying weaknesses in the local election system. The State needs to be doing a better job tracking felon voters and freezing their records until sentences are complete. NC would also do well to implement voter identification requirements into the absentee voting system–addressing the impersonation of dead voters and others,” Logan Churchwell, Communications & Research Director for the Public Interest Legal Foundation, told The Daily Caller in an e-mail statement.

“The continued trend of noncitizen voting can only be fixed with proof of citizenship built into voter registration applications. Simply inquiring about eligibility is not going to cut it any more,” he added.