Just as it emerged this week that the FBI cited the Trump dossier to obtain a surveillance warrant against Trump advisers, another allegation made in the 35-page document is coming under scrutiny.

A computer hacker identified in the dossier, compiled by former British spy Christopher Steele, is currently in a Russian prison on pedophilia charges, McClatchy reports.

And a Russian prison monitor who recently met with the man, Sevastyan Kaptsugovich, says that the prisoner does not have access to the Internet — a requirement for carrying out the cyber attacks alleged in the dossier. (RELATED: FBI Relied On Dossier To Obtain Warrant To Spy On Trump Adviser)

Kaptusgovich is identified in a Dec. 13 memo, Steele’s last report for the dossier, which was published by BuzzFeed on Jan. 10.

Steele compiled the memos on behalf of Fusion GPS, an opposition research firm working for an ally of Hillary Clinton’s.

The dossier refers to the alleged hacker as Seva Kapsugovich, a slight misspelling of his real name. McClatchy was able to verify that he is a computer expert and is currently in prison.

Artur Abashev, an official with the Public Monitoring Commission, a group that monitors Russian prisons, told McClatchy that Kaptsugovich is a prisoner at the penal colony and that he does not have access to the Internet, a computer, or a cell phone.

Abashev said that it is “unlikely” that Kaptsugovich would have been able to carry out the alleged cyber attacks given his lack of computer access.

The human rights worker confirmed his recent meeting in an email to The Daily Caller and said that Kaptsugovich is treated “negatively” by other prisoners because of the nature of his crimes. He also works in the prison bathhouse, washing bedclothes for other inmates.

Sources who talked to McClatchy did say that it is still possible that Kaptsugovich carried out the cyber attacks alleged in the dossier while at the penal colony. Russian intelligence services often recruit criminals and prisoners for computer hacking operations.

But other parts of the Dec. 13 memo naming Kaptusogovich have already been disputed.

The entry names the convict in the same paragraph as Aleksej Gubarev, a tech executive who is head of the web hosting companies, Webzilla and XBT Holdings. 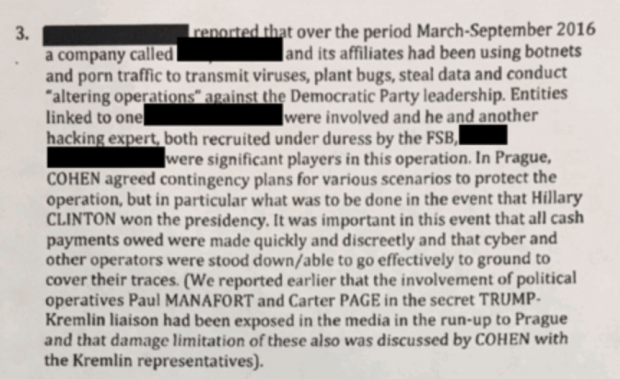 Passage from Dec. 13 memo in dossier compiled by Christopher Steele

The memo alleges that Gubarev and Kaptsugovich were recruited “under duress” by Russia’s spy services and were “were significant players” in the operation to hack Democrats.

But Gubarev strongly denies having been recruited by Russian spies or taking part in any cyber attacks. He is suing BuzzFeed News for publishing his name in the dossier. The website responded to the suit by apologizing to Gubarev and redacting his name from the online version of the document. (RELATED: Russian Tech Exec Sues BuzzFeed For Publishing His Name In Dossier)

BuzzFeed also appears to have redacted Kaptsugovich’s name since its first publication of the dossier, though it is unclear why.

Evan Fray-Witzer, a lawyer for Gubarev, told The Daily Caller on Friday that there is “no connection whatsoever” between Kaptsugovich and his client.

“We know that the allegations in the dossier [published by Buzzfeed] concerning Mr. Gubarev, XBT, and Webzilla are wholly without factual basis but, beyond that, we cannot say what role others may have played in the hacking of the DNC.”

“What Buzzfeed did was wildly irresponsible and damaged our clients and those facts aren’t going to change,” Fray-Witzer said.

The rest of the memo discusses an alleged meeting in August in Prague between Trump lawyer Michael Cohen and Kremlin officials. Other memos in the dossier allege that Cohen and the Russian agents were discussing ways to influence the election. Cohen has vehemently denied the claims, saying that he was in the U.S. at the time he was alleged to have been at the meeting.

Despite those inconsistencies in the dossier, the FBI appears to have had enough confidence in some parts of the document to cite it in an application for a surveillance warrant on Carter Page, a former Trump campaign adviser who has done business in Russia.

The FBI obtained the warrants in September, after Page left the campaign.

Steele claims in the dossier that Page met secretly with Kremlin officials and Igor Sechin, the president of Russian oil giant Rosneft, to hammer out a plan to help Trump win the election.

Page says he has never met Sechin and refers to the Steele memos as the “dodgy dossier.”

In addition to citing the dossier in the FISA application, FBI Director James Comey has reportedly cited it in recent meetings with congressional investigators.

Republicans have questioned why the FBI would rely on the dossier given the many questions about its veracity. Some see it as a politically-motivated document given that it was financed by a Clinton ally.

But Steele has worked with the FBI on other cases, and intelligence community veterans have noted that it would not be out of the ordinary for a document compiled by an intelligence expert to have a mixture of accurate and inaccurate information.

Ron Hosko, who served as assistant director of the FBI’s criminal division until 2014, says that he has confidence that FBI officials properly vetted the dossier, even if some parts of the document are inaccurate.

“They wouldn’t be just dropping an unvalidated dossier in the middle of a surveillance warrant application and treating it as if it was true in its entirety. They may well take pieces of it, characterize the source of the information, talk about how they independently validated it,” he told TheDC.

Hosko, who was critical of Hillary Clinton’s use of a private email server, says he has faith that Comey, who he has worked with closely, is conducting a fair investigation.