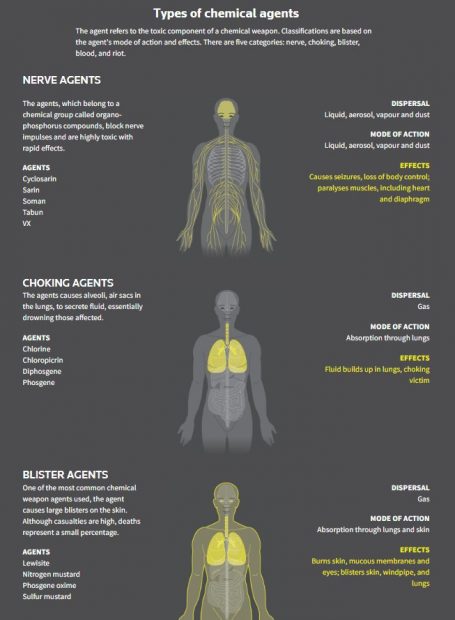 The April 2016 use of the weapons is likely Assad’s first use of a nerve agent since 2013, when Sarin killed hundreds of civilians in Damascus suburbs. Assad however has regularly used chlorine in the Syrian civil war which is a choking agent. Chlorine causes “air sacs in the lungs, to secrete fluid, essentially drowning those affected.”

The first widespread use of chemical weapons dates to World War I when the Germans deployed chlorine gas. Both sides in the war quickly adopted the tactic, and within years tear gas, mustard gas, and chlorine gas were used with impunity. While gas casualties were only a small fraction of casualties in the war, doctors noted that troops were far more afraid of chemical weapons than conventional attacks.

The widespread horror at the effects of chemical weapons prompted an allied-wide effort to ban their use. Gas attacks were particularly psychologically scarring because the skin blistered, people asphyxiated, and respiratory systems were permanently damaged. Chemical weapons are also indiscriminate weapons, blowing back on those who deployed them and spreading to nearby civilian populations.

This led to a general consensus among the victorious countries of World War I to adopt the 1925 Geneva Protocol. The protocol banned the use of “poisonous gases” and “bacteriological warfare.”