A new report ranking countries with “the most environmentally friendly people” shows the greenest nations are also some of the poorest in the world.

A MoneySuperMarket report listed Mozambique, Ethiopia and Zimbabwe as having “the most environmentally friendly people in the world,” while ranking Americans as being some of the least eco-friendly people on the planet. That may not be a bad thing, though, given the greenest countries also tend to be poor and run by authoritarian regimes.

“At the top of the list, people from Mozambique have the least impact of anyone anywhere – using almost 100 per cent green energy, producing almost no carbon dioxide and creating almost no waste,” MoneySuperMarket said in a statement. “Their only disadvantage is that they don’t treat any of their wastewater, so anything that gets poured away stays as it is.”

The average person living in Mozambique earned $511.47 a year in 2015, which was 4 percent of the global average. Mozambique is ruled by an authoritarian-leaning “hybrid regime,” according to the Economist’s Democracy Index.

Likewise, the Economist lists Ethiopia’s government as an authoritarian regime, and Zambia is listed as having a “hybrid regime.” Ethiopia’s average resident earned $1,529.89 a year in 2015, and the average Zambian earned only $3,602.33. In contrast, the average American earned nearly $52,000 a year. 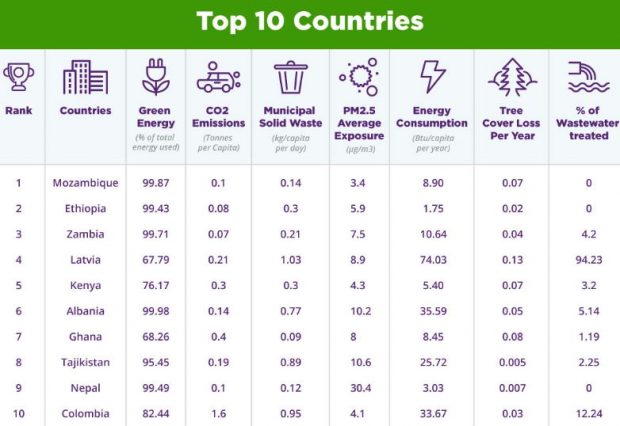 In fact, there is not a single “full democracy” listed in the top 10 of MoneySuperMarket’s report. Three countries are listed as “flawed democracies,” four as “hybrid regimes” and three as authoritarian states. 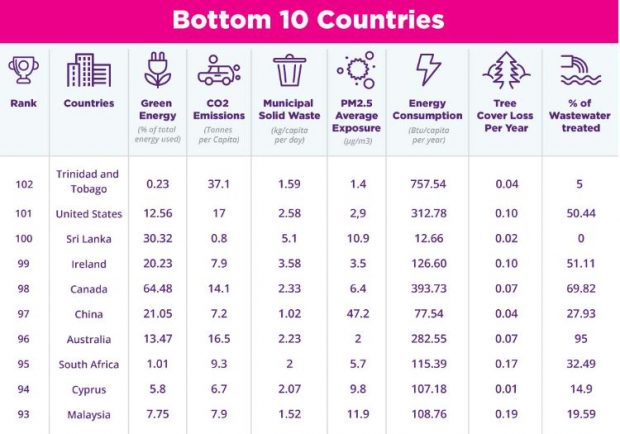 The 10 least green countries listed in MoneySuperMarket’s report were far richer and more democratic than the greenest countries. Four of the 10 countries had “full democracy,” five were listed as “flawed democracies” and only China was listed as authoritarian.

The average person in MoneySuperMarket’s 10 dirtiest countries made $29,472.99 in the year 2015, which was nearly twice the global average for that year.