An ex-Breitbart News reporter put a conspiracy theory to rest Tuesday night by denying that Andrew Breitbart was murdered on March 1, 2012 near his home in Los Angeles.

Just out this morning is a new message from Stranahan on the matter. 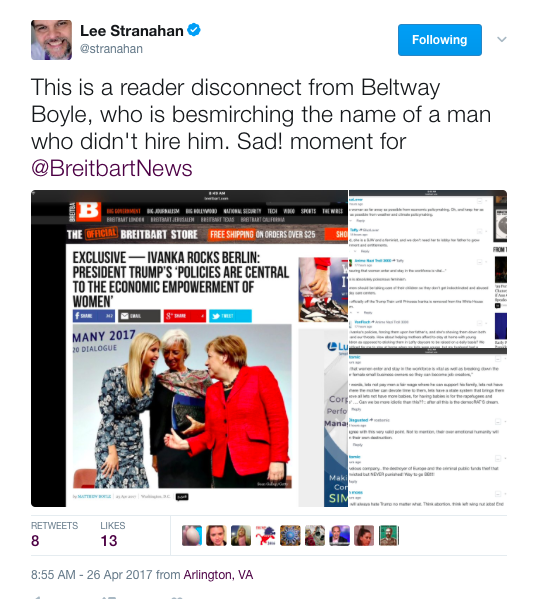 But in his off hours, he posts wild Periscope videos in which he disembowels Breitbart’s news judgment and sticks daggers into Boyle. Mostly he just says whatever the hell he feels like saying.

The radio host’s beef with Boyle is fierce. Boyle recently put the kibash on Stranahan attending White House briefings. It was the final straw. Stranahan quit the site. But he wasn’t going out without a ball of fire. In a dramatic exposé on Periscope, he took viewers on an hour by hour journey on the state of his job and ultimately, his resignation.

In a tweet Wednesday morning, Stranahan wrote, “Comments on this shameful puff piece by fluffier Matt Boyle show how out of touch he is with Breitbart News readers.” He even presented followers with a poll: “If only one could remain in the White House to influence policy, I would choose…” The choices are: Steve Bannon or Ivanka Trump.

A reader smartly asked, “Dude. What’s up with your hard on for Ivanka? What’s the end game here? The point? Ya think her pop is gonna give her up for adoption?”

Stranahan, who has a funny, nonchalant personality especially when he’s irate, replied, “I’ll ignore your crass formation. Do you think Ivanka should be in an official White House position impacting policy?”

He usually speaks kindly of Boyle’s personality while questioning his journalistic chops.

But Tuesday night was different.

In a tweet accompanying his latest Periscope video, he warned, “I’m going to try & control my temper: but here’s why Matt Boyle/Breitbart Ivanka sellout is SO BAD.” 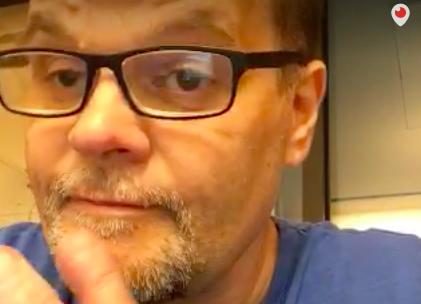 He began with an admission: “I’m in a bad mood.”

At first, he spent a while just going off on Boyle.

“Matt thinks he’s the secret sauce — and he’s not.”

“I know where Matt hangs out. He knows where I hang out.”

Is this a movie on the mob?

“I texted you.” (Stranahan texted Boyle to tell him to end his journalism career. He held the phone up for viewers to see.)

“I think I’ve done a great job of not throwing my glasses.”

One of which was, “Was Andrew Breitbart murdered?”

This made him absolutely furious. “You want to know the truth about Andrew Breitbart’s death?” he asked.

This was like taking the pin out of a hand grenade.

Of course we do.

Stranahan said he spoke with him three hours before he died.

“When you go to the hospital for a heart condition, they tell you to slow down,” he continued. “He didn’t slow down. That’s a hero. Andrew went out doing what he loved doing. He went out on his own terms. …Andrew told me three hours before he died that he felt a heart pang and felt he had taken so many arrows for people, which is true, that maybe what he felt in his heart was that. Do you understand? Think about that. Think about who he took arrows for.”

Stranahan took his viewers into his late mentor’s mind.

“I don’t think he would have chosen to do anything different,” he said. “He died the way he lived — which was we were talking about stories three hours before he died. I was supposed to call him back an hour after he died. I sent him a text message. He was dead. I didn’t know it.”

“Bullshit stories about how Andrew Breitbart’s death…go fuck yourself…ya dig?” he groused, growing increasingly angry. “That he was killed with a heart attack gun. Andrew Breitbart was no victim. The reason Andrew died is he was taking arrows for people in the conservative movement. It infuriates me. This guy who did journalism the right way.”

Stranahan said he has been fighting for Andrew Breitbart’s legacy “tooth and nail.”

Again, his fury turned to Boyle.

Still, a question floated on the Periscope screen:

“Did you have Andrew Breitbart killed?”

Let’s hope Stranahan counted slowly to 10 before going to bed.