WASHINGTON — The Trump administration is proposing drastic reductions in both the individual and corporate income tax rates in its bold plan to overhaul the tax code.

Touting it as “the biggest tax cut” in the history of the United States, Treasury Secretary Steve Mnuchin and National Economic Council director Gary Cohn briefed reporters for roughly 20 minutes on the principles of the tax plan at the White House Wednesday. The plan, which Cohn called “a broad brush interview,” did not include specifics. 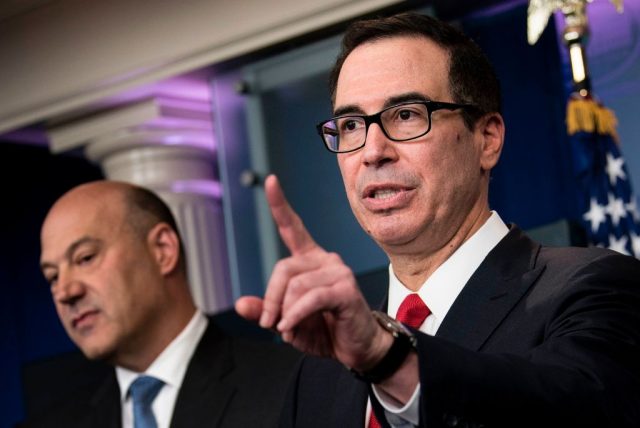 For individuals, the plan will double the standard deduction people can claim on their tax returns, providing a significant tax cut for middle-income Americans, while reducing the number of tax brackets from seven to three — 10 percent, 25 percent and 35 percent.

“In essence, we are creating a zero tax rate — yes, a zero tax rate — for the first $24,000 a couple earns,” Cohn said. “Families will benefit from tax relief that will help them with child and dependent care expenses.”

The administration has repeatedly said that filing taxes has become too complicated, and Mnuchin has even floated the idea of people filing their returns on a “large postcard.” The White House said it will simplify the tax return process by eliminating tax breaks that benefit the wealthiest taxpayers and repealing the Alternative Minimum Tax.

“We are going to eliminate, on the personal side, all tax deductions other than mortgage interest and charitable deductions,” Mnuchin said.

As far as businesses, the plan slashes the corporate tax rate from 35 percent to 15 percent for both large and small companies while eliminating tax breaks for special interests. The business side of the reform also institutes a one-time tax on corporate earnings held overseas.

“This tax reform package is about growing the economy and creating jobs,” Cohn said. “That’s how we are looking at this plan. It’s to stimulate business investment.”

“We will let you know the specific details at the appropriate moment,” Cohn added.