Convicted felon Donna Hylton spoke on a civil rights panel at a fancypants college earlier this month but completely failed to mention that she — along with several others — kidnapped a man, forcibly sodomized him with a steel pole and then tortured him to death. When a student at the event asked Hytlon about the heinous crime, a second panelist loudly berated the student for having “embarrassed” Hylton.

The panel, titled Ella Baker Day, occurred on the evening of April 13 at Manhattanville College in the swanky suburbs of New York City. A single year of tuition, fees and room and board at Manhattanville costs $56,550.

The Ella Baker Day panel focused largely on the rights of prisoners. Hylton “went on for about 30 minutes” about the “physical aspects of the jail” and about her complaints as a prisoner, according to the student who asked Hylton about her criminal past.

“She mentioned graphic stories,” the student told The Daily Caller. “If you were not crying by the time she was done speaking, there’s something wrong with you.”

Hylton “made it seem like she was some innocent woman who was put in jail,” the student also said. “She didn’t say why she was in jail. She said it was because of the color of her skin.”

“Her basic theme was, ‘I am an innocent victim and it’s because of how awful Donald Trump is.'”

Without question, Hylton is no innocent victim.

In 1985, Hylton along with three men and three other women, kidnapped 62-year-old real-estate broker Thomas Vigliarolo and held him for ransom before eventually killing him. Hylton and her comrades starved, burned and tortured Vigliarolo. They forcibly sodomized him with a 3-foot steel pole.

As noted in a 1995 Psychology Today article, when asked about forcibly sodomizing the victim with the steel pole, one of Hylton’s accomplices replied: “He was a homo anyway.”

“They’d squeezed the victim’s testicles with a pair of pliers, beat him, burned him,” New York City detective William Spurling told Psychology Today. “I couldn’t believe this girl who was so intelligent and nice-looking could be so unemotional about what she was telling me she and her friends had done.”

Hylton reportedly delivered a ransom note to one of Vigliarolo’s friends asking for more than $400,000, even though the sexually-tortured man was already dead by that point. Hylton’s delivery of the ransom note led to her arrest.

For her participation in the murder, Hylton received a prison sentence of 15 years to life. She served 27 years.

Hylton, now 52, has become a celebrity on the radical left because of her imprisonment. Hylton’s name is listed on the website of the Women’s March on Washington alongside Planned Parenthood president Cecile Richards, radical feminist activist Gloria Steinem, filmmaker Michael Moore and CNN commentator Van Jones. (RELATED: Women’s March Featured Speaker Who Kidnapped And Tortured A Man)

Despite speaking for nearly a quarter of the two-hour Ella Baker Day panel at Manhattanville College, Hylton never disclosed her crimes.

“I found it suspicious that she did not explain why she was incarcerated,” the Manhattanville student who attended the event told TheDC. “My immediate thoughts were: Well, people don’t randomly end up in jail,” the student added. “There is a reason.”

“She was pulling the audiences heart strings in order for them to side with her.”

The student did some on-the-spot Internet research. Then, during a question-and-answer period at the end of the event, the student asked Hylton a question.

According to the student, Hylton responded by saying that she had not come to the Manhattanville campus to discuss her crimes. She insisted that she was only there to talk about how she was sad that she had a bad time in prison.

A second Ella Baker Day panelist, Shirley Leyro, then loudly declared that the student was being disrespectful by inquiring about the murder-related crimes Hylton committed.

“She said I had embarrassed Hylton,” the student said.

Leyro is an assistant professor of criminal justice at Borough of Manhattan Community College. Her research “focuses on deportation effects – including the impact of the fear resulting from the vulnerability to deportation,” according to her website.

The student elaborated on why she asked Hylton about the murderous crimes she committed.

“I thought the students at the event weren’t thinking critically,” the student said. “They were just thinking about being social justice warriors in that moment.”

The student does not want to be named and did not speak to school officials about Hylton’s appearance on campus, partly out of fear of making them mad.

“I would love to hear their answer about why a murderer was on our campus,” the student said.

A Manhattanville College spokesman provided TheDC with a statement about Hylton’s campus appearance.

“Donna Hylton was a guest panelist for the Ella Baker Day event the College’s Sociology Department held,” the statement from Anthony “T.J.” Buzzeo said. “I would be happy to pass along any specific questions you have to Hephzibah Strmic-Pawl who organized the event.”

Strmic-Pawl, an assistant professor of sociology at Manhattanville, focused her statement to TheDC squarely on “the legacy of Ella Baker,” saying the event “acknowledges the work of contemporary social justice activists.”

“Hylton is a nationally recognized speaker on the issue of solitary confinement, which is why we invited her,” Strmic-Pawl wrote.

“Ella Baker Day is about honoring the well respected Civil Rights activist Ella Baker and inspires current generations to learn from her activism.”

Strmic-Pawl admitted that Hylton and other panelists “received a small honorarium for speaking at Ella Baker Day” but refused to say exactly how much Manhattanville College paid Hylton for her two-hour appearance.

Strmic-Pawl also chose not to indicate whether she or anyone else had advised students at Manhattanville concerning the crimes Hylton committed. 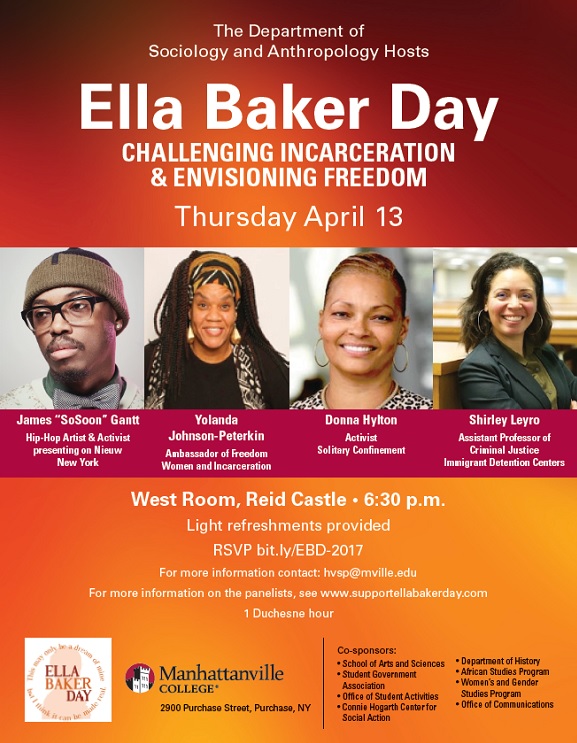 According to her Manhattanville webpage, “Strmic-Pawl’s teaching and research interests center on race, racism, and social inequality, with a particular focus on multiracialism.” Her curriculum vitae mentions the phrases “social justice” and “white supremacy” eight times each.

Carmichael was a one-time “honorary prime minister” of the Black Panther Party.

The Manhattanville student who asked Hylton about why she landed in prison called the college’s essential concealment of Hylton’s crimes disappointing.

“She played the victim card and did not tell the truth from the beginning,” the student said. “More people need to understand the indoctrination that is happening on college campuses.”