Hinn is famous for his stadium-filling “Miracle Crusades.” At these revival-style events, held worldwide, Hinn claims to use special, supernatural power to heal people suffering from terminal diseases and various handicaps. 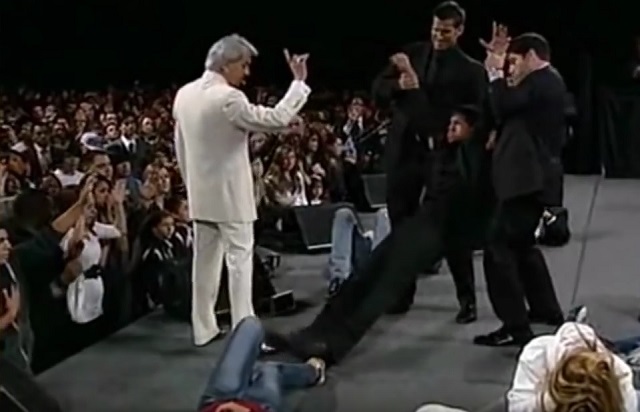 BREAKING:US Postal Service inspectors and IRS on scene at @Benny_Hinn ministries in Grapevine. Waiting for info about investigation. @NBCDFW pic.twitter.com/Ygim6LplK8

“Today, we are here on official business,” IRS criminal investigations special agent Michael Moseley told the flock of reporters who gathered to watch the slow-moving raid.

“We are primarily investigating Title 26, which is tax evasion and general fraud against the government,” Mosely also said, according to WFAA.

“We are conducting a search warrant on the premises. Basically, that’s all I can tell you today,” Moseley added.

An unidentified federal employee told WFAA that the investigation into potentially illegal activities by Hinn had been extensive prior to Wednesday.

Reports suggest that Hinn is currently in France.

A report at Patheos, a nondenominational religious website, suggests that Hinn or his organization may have removed a tweet about his visit to France.

“Religious organizations are not required to be as transparent as other nonprofits,” Throckmorton told TheDC.

“Hinn is innocent until proven guilty but, hopefully, this investigation will answer many questions about Hinn’s ministry which have been raised over the years.”

Hinn has a reputation for living a lavish, fancy life. He flies in a private jet and stays in the finest hotels worldwide, according to The Dallas Morning News.

The Senate Finance Committee investigated — and ultimately cleared — Hinn and half a dozen other pastors in 2007.

The IRS also investigated Hinn in 2005.

In 1999, Hinn declared that he was totally going to build a $30 million center dedicated to faith healing. He raised several million dollars. However, the center never materialized.

In 2013, Hinn remarried his wife, Suzanne, after she had filed for divorce in 2010, according to the Christian Broadcasting Network.

The ceremony took place in Orlando, Florida at the Holy Land Experience, a Christian theme park featuring a replica of Jerusalem’s Old Testament-era temple, restaurants, shops and a 2,000-seat auditorium.

Hinn’s long-running television program, “This Is Your Day,” is among the most-watched Christian TV programming on earth.

Hinn has repeatedly denied accusations of fraud and tax evasion.