A graduate student union at Yale University started a symbolic hunger strike outside of the university president’s home Tuesday, stating “when one of us cannot continue, come take our place.”

The strike, conducted to encourage the university to start collective bargaining, is spearheaded by eight members of the Local 33 graduate student union, reports Yale Daily News.

“Instead of eating your lunch, sit with us and lift our spirits,” reads a pamphlet distributed by the group. “When one of us cannot continue, come take our place.”

“We want our Fast to inspire joy … the joy that comes from taking action for what is just. 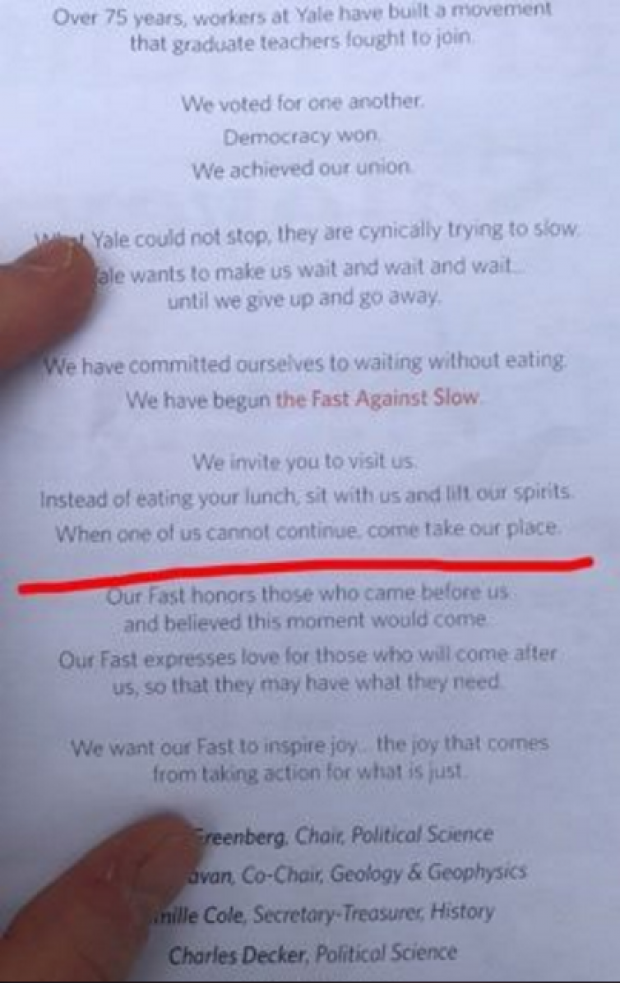 “Update: the Yale grad student union is holding a *symbolic* hunger strike (they eat when hungry),” said Dimitri Halikias in a tweet obtained by Legal Insurrection but that is now only available to the Yale graduate’s Twitter followers. The tweet included a photo of the pamphlet. “Still inspirational.”

Local 33 is a contingent of UNITE HERE, an international labor union which, earlier in April, commanded Yale to start labor negotiations on Tuesday. Last week, two more departments in Yale’s Graduate School of Arts and Sciences unionized as a result of the effort, raising the total number from six to eight.

“The University cannot compel anyone to refrain from this activity, but strongly urges that students not put their health at risk or encourage others to do so,” Yale spokesman Tom Conroy told Yale Daily News. Conroy also called the bargaining request premature and termed the hunger strike “unwarranted by the circumstances.”

“Yesterday on Beinecke Plaza, without seeking the required approval to hold a demonstration there, Local 33 erected a large tent-like structure as part of what it said would be an ongoing, indefinite protest,” Conroy told The Daily Caller News Foundation. “Structures are not permitted in that space, and the individuals who were demonstrating were notified today that it is in violation of University policy, jeopardizes the safety of the demonstrators and others, and needs to be removed.”

The spokesman also told The DCNF that Yale provides doctoral students stipends of at least $30,000 and covers their entire health insurance, which totals almost $375,000 per student for six years.

The DCNF reached out to Local 33 for comment, but received none in time for publication.