The left-wing activists behind the anti-conservative riots at Berkeley have ties to one of the nation’s most prominent pro-pedophilia organizations.

The Coalition to Defend Affirmative Action, Integration & Immigrant Rights, and Fight for Equality By Any Means Necessary — more commonly referred to as By Any Means Necessary or BAMN — is one of the militant leftist groups waging a campaign against conservatives and Trump supporters in Berkeley. The group’s planned aggressive demonstrations against conservative commentator Ann Coulter and the students coming to hear her talk led to the cancellation of Coulter’s speech this week due to safety concerns. (RELATED: ‘INFERNO’ — Milo Speech Cancelled After Rioters Set UC Berkeley Campus Ablaze)

BAMN, which did not return a phone call and voicemail seeking comment, was founded by the Revolutionary Workers League, a small, Detroit-based Marxist organization. Many of BAMN’s leading members over the years have also been RWL members. (RELATED: Berkeley School District Says BAMN Tried To ‘Brainwash’ Students)

“The Revolutionary Workers League is a Trotskyist organization of which I’m a member,” Luke Massie, one of BAMN’s founders told the Michigan Daily in 2001. “We are proud to have played a part in a whole lot of struggles and to have played a role in the founding of BAMN.”

An anonymous group of researchers provided TheDC with copies of internal NAMBLA publications from the 1990’s. The internet sleuths requested anonymity, citing fear of retaliation by BAMN members, and asked instead to be collectively referred to as, “The shadowy and/or mysterious organization known as Antifaleaks.” 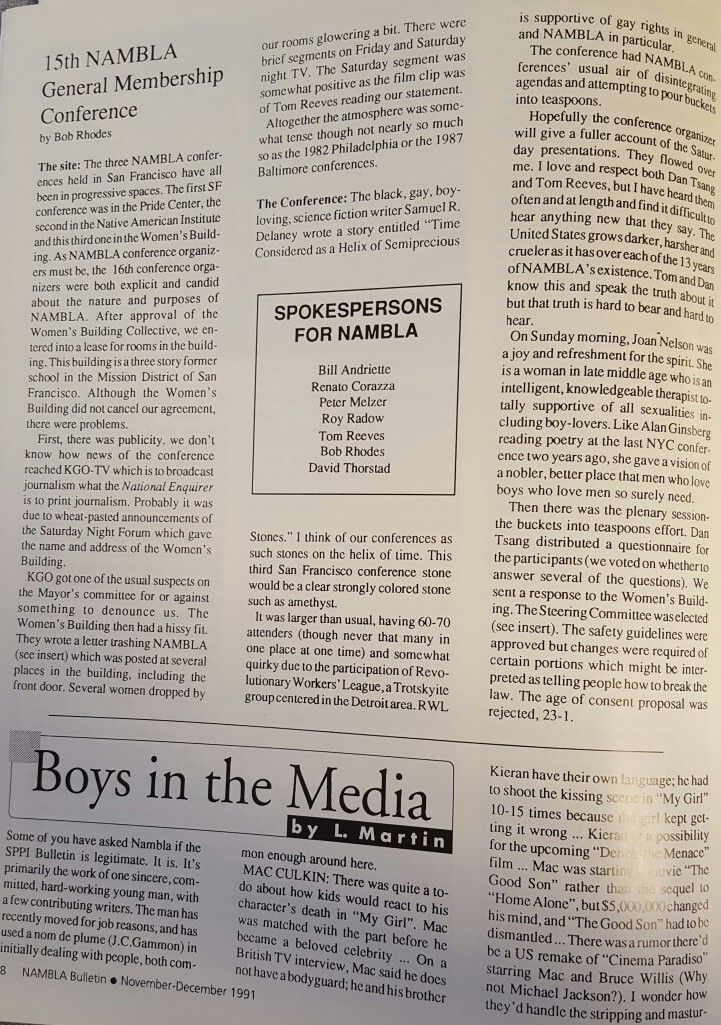 NAMBLA’s conference was “somewhat quirky due to the participation of Revolutionary Workers League.”

The bulletin noted that “a number of proposals were put forward by the Revolutionary Workers League” at the NAMBLA conference. 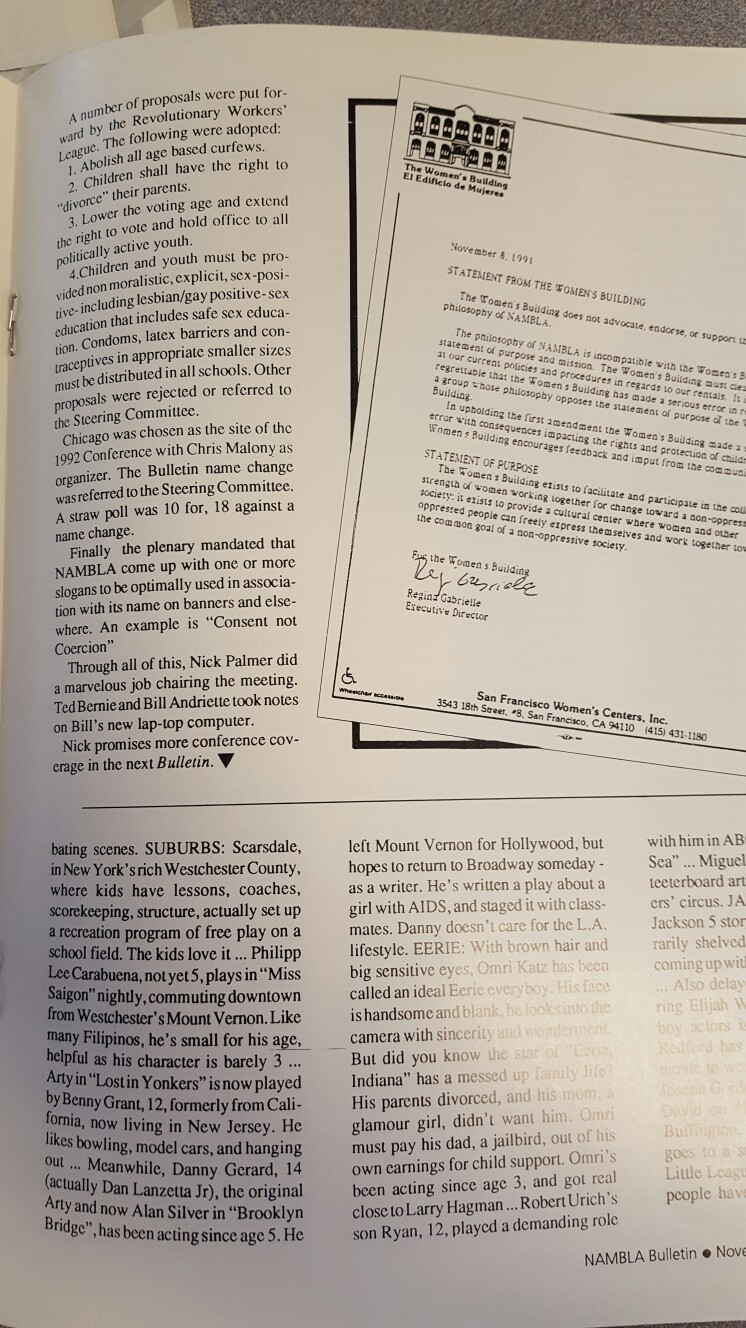 Four of RWL’s proposals (top left) were adopted at the NAMBLA conference.

Four of those proposals were adopted as positions by NAMBLA: 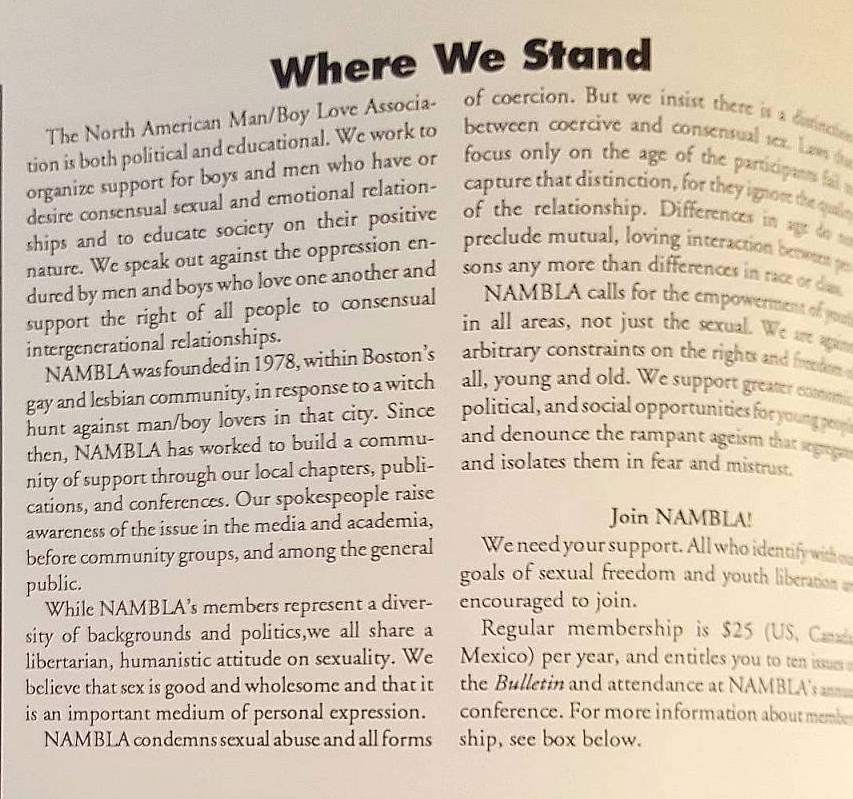 The 1992 edition of the pro-pedophilia bulletin also noted the participation of RWL, which was described as a “NAMBLA ally.”

Shanta Driver, described by the Capital Research Center as BAMN’s founder and co-chair, was affiliated with RWL as early as 1983, according to the Workers Vanguard, a communist publication. She also identified herself to the Los Angeles Times as an activist with RWL in late 1995 while protesting in Berkeley.

Driver argued before the Supreme Court on behalf of BAMN as recently as 2013.

Driver’s former law partner, Eileen Scheff — who has represented BAMN on multiple occasions, including at the Supreme Court — has been a self-described “member of NAMBLA.” The bulletin identified Scheff as an RWL member. 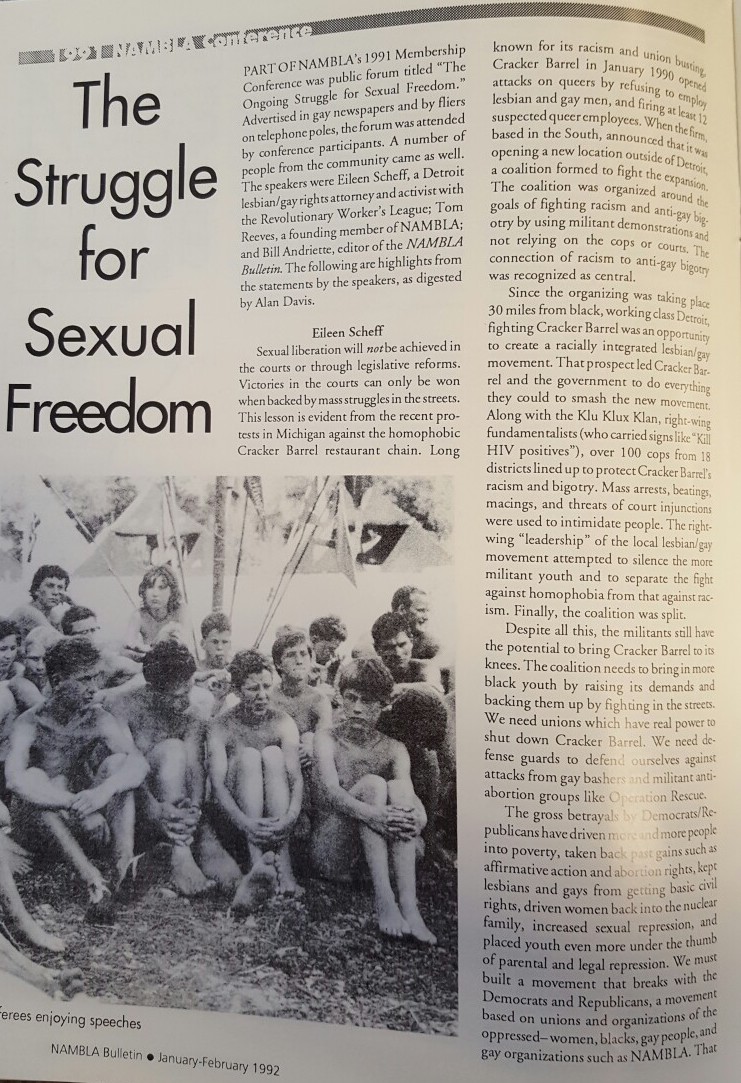 The text of Scheff’s speech was accompanied by a picture of shirtless young boys listening to a talk.

Additionally, Scheff has been identified as a founder of BAMN.

Peter Schmidt, a senior writer for the Chronicle of Higher Education, wrote in a book for which Scheff was interviewed that she “helped found” BAMN, in addition to serving as its legal counsel. “Affirmative action was built by people taking direct militant action,” she told Schmidt, explaining BAMN’s riotous approach to activism.

At a 1991 NAMBLA press conference, Scheff denounced the “witch-hunt” against pedophiles.

“As an activist in the legal and political struggle for lesbian/gay rights and for freedom of sexual expression, I am here to support NAMBLA and to demand that the witch-hunt against it must be stopped,” Scheff said at the conference. “The media and police are targeting NAMBLA because it stands for the rights of young people to have consensual sex with whomever they want.”

“Denying youth their sexuality or driving sexual expression deeper and deeper underground will not stop child molestation,” Scheff added. She called for “youth-controlled centers where they can freely socialize and enjoy safe, consensual sex.”

“I call on all progressive people in the lesbian/gay community, in the women’s movement, and in the community at large to defend NAMBLA and its right to advocate for consensual sex regardless of age, and to unite our forces to make a fight for the real solutions to sexual coercion and abuse,” Scheff said.

A Thursday phone call to Scheff’s office was not returned because, according to her voicemail, she is out of the country until May 5. She also did not return an email seeking comment.

BAMN has led the resistance against conservatives and Trump supporters in Berkeley and elsewhere in California.

Seven people were stabbed in the clashes between the white nationalists and self-described “anti-fascists.”

“The goal today was to shut down the Nazis’ recruitment rally and I want to congratulate everyone who came out today because we succeeded in doing exactly that,” Felarca said in an interview afterward. “We defeated them and they had to run away hiding behind the police.” She credited their victory to the “militant, integrated, direct action of the people who came out.”

“BAMN mobilized to get people out here and shut them down,” she admitted. “For us, there’s no free speech for fascists…Nazis and fascists are dangerous and must be stopped and shut down by any means necessary.”

The group utilized those same tactics in organizing protests against right-wing provocateur Milo Yiannopoulos, who was scheduled to speak at University of California – Berkeley in February. The group deemed Yiannopoulos a fascist. His speech was cancelled after rioters assaulted suspected Trump supporters and set the campus ablaze.

After Felarca faced a backlash for her open disdain for conservative free speech in a Fox News interview with Daily Caller co-founder Tucker Carlson, Driver held a press conference with Felarca, railing against her critics, who Driver said organized a “witch hunt” against Felarca.

BAMN was also among the left-wing groups that attacked attendees of a conservative free speech rally on April 15, according to a local Berkeley newspaper, which noted: “BAMN was in the middle of the melee at all three of the recent rallies, including the Feb. 2 Yiannopolous protest.” (RELATED: The Left’s Embrace Of Political Violence Backfires In Berkeley) 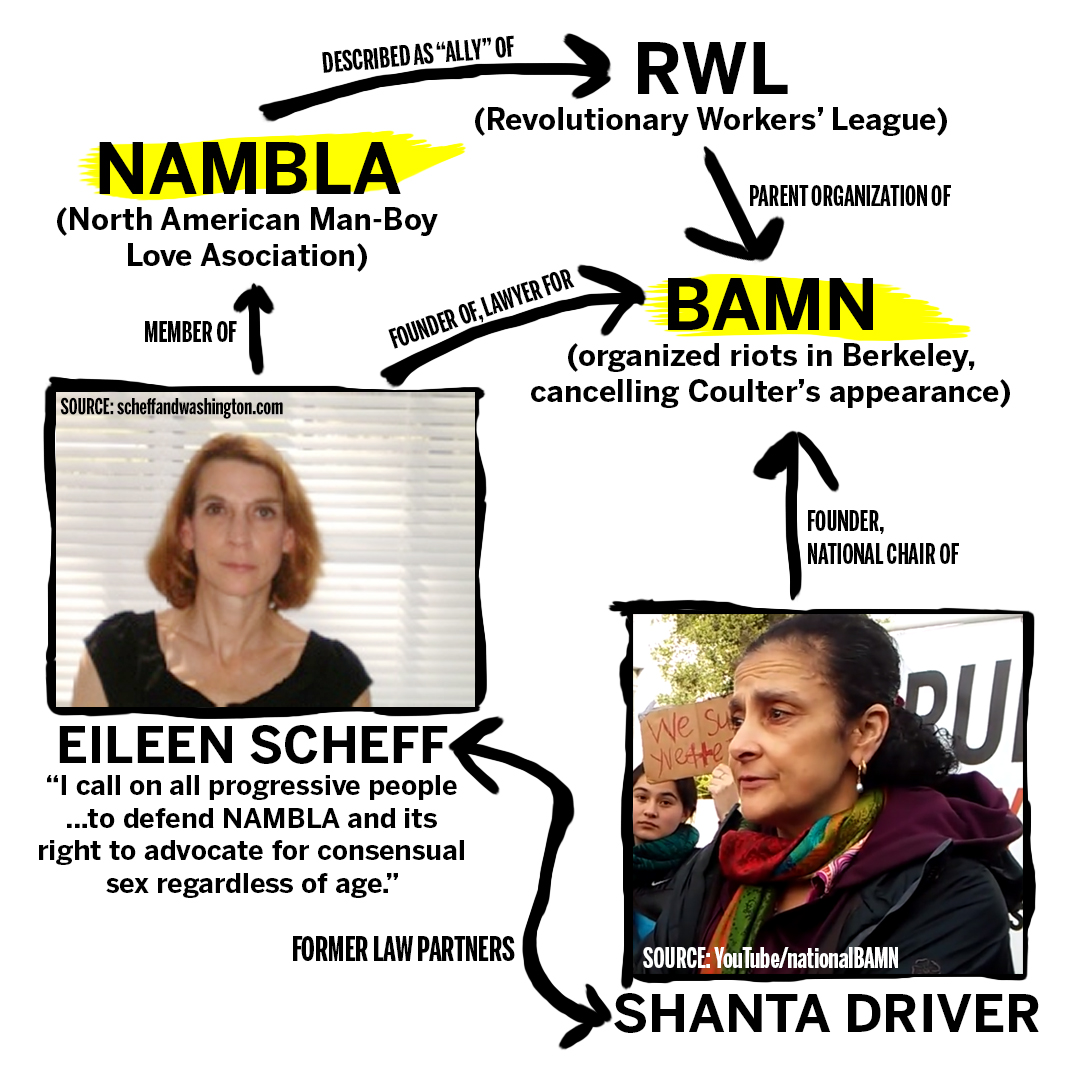 Most recently, BAMN successfully forced the cancellation of conservative commentator Ann Coulter’s speech at the UC-Berkeley due to safety concerns.

“Our basic thing is to send a loud and clear message that this is not acceptable on our campus,” Hoku Jeffrey, a BAMN organizer, told The New York Times before Coulter’s speech was cancelled. “We will not tolerate anti-immigrant bigotry or bigotry of any kind, which is the only thing she’s here to do.”

BAMN has a history of co-opting youth into its activist goals.

The Capital Research Center, a D.C.-based research nonprofit, noted in a report on BAMN: “In Michigan in 2006, several hundred BAMN activists stomped on the floor and shouted obscenities to disrupt a meeting of the state’s Board of Canvassers, which had gathered to certify a ballot initiative allowing voters to decide whether to ban government race and gender-based preference policies. BAMN bussed in Detroit high school students whose chants drowned out speakers.”

In 2005, the NAACP criticized BAMN for taking advantage of black middle- and high-school students to add to their numbers.

“Some of them didn’t even know why they were there – they were just there as tokens, so people would see a large number of black students,” Alex Moffet, then-president of the NAACP said, adding that BAMN was “just perpetuating untruths about young black students. As a community, we find that totally unacceptable.”

In 2005, the FBI put BAMN on a list of organizations potentially involved in terroristic activities. The ACLU publicly blasted the FBI in defense of BAMN, which the ACLU said was only engaging in “peaceful protest activities.”