Justice Department officials and the Federal Bureau of Investigation have investigated the university run by the wife of Vermont Sen. Bernie Sanders — and may still be investigating it — over the possibly fraudulent acquisition of nearly $7 million in tax-exempt bonds when she was the president of Burlington College.

An extremely ambitious expansion and fundraising effort spearheaded by Jane Sanders ended up bankrupting the tiny, private and now-defunct school in Burlington, Vermont. It closed its doors — suddenly and permanently — in 2016.

Emails obtained through an open records request by The Vermont Journalism Trust reveal that FBI agents and the US Attorney’s Office in Vermont have been analyzing Burlington College records for over a year. Also, the feds have subpoenaed at least one former Burlington College employee.

That employee, former Burlington College dean of operations Coralee Holm, told The Vermont Journalism Trust that FBI agents questioned her about the fundraising activities related to the expansion.

Jane Sanders, who was the president of tiny Burlington College from 2004 until 2011, masterminded the expansion plan, which would have more than doubled the enrollment of the school (from about 200 full-time students to over 400). The plan required the college take on $10 million in debt to finance the purchase of an expansive new campus.

The real estate purchase backfired massively, leading to Sanders’s departure from the college and its eventual collapse.

The expansion plan involved the purchase of a 33-acre plot on the shores of Lake Champlain owned by the Catholic Diocese of Burlington. The prime acreage contained a three-story building — once an orphanage — which was to be the centerpiece of the new Burlington College campus. The diocese was selling the property to help pay for a $17 million settlement of several sex-abuse lawsuits. 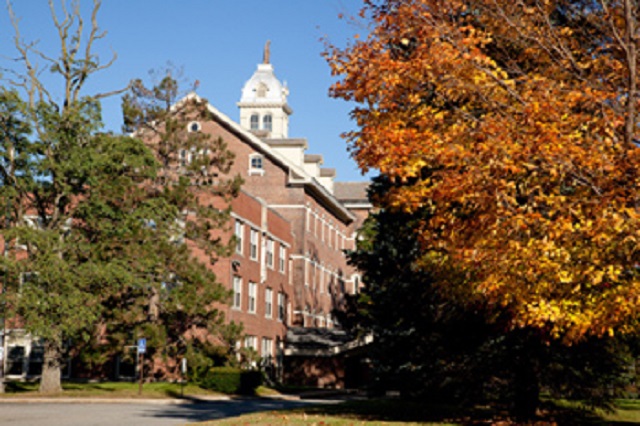 In order to finance the purchase, Burlington College presented its case to the Vermont Educational and Health Buildings Finance Agency, a state agency that issues tax-exempt state bonds for the benefit of nonprofit institutions such as schools or hospitals.

People’s Bank agreed to purchase the bonds, “contingent upon” a “minimum commitment of $2.27 million of grants and donations prior to closing.” (RELATED: Bernie Sanders’s Wife May Have Defrauded State Agency, Bank)

Sanders suggested at the time that she and the school had lined up several donors ready to fork over $2.6 million. And that was just the tip of the iceberg, Sanders promised at the time. Many other potential pledged donations would be forthcoming.

And thus, in 2010, did the state finance agency grant the school $6.7 million in tax-exempt bonds.

The FBI agents who interviewed Holm asked about the promised contributions which the bank relied upon in issuing the funds.

“They were asking for documentation about the fundraising that had occurred before the college had moved to its new location,” Holm told The Vermont Journalism Trust.

Holm said she turned over emails she had received from Sanders to the FBI.

The feds also took possession of a “filing cabinet full of donor files,” according to Holm.

Sanders has not disclosed whether FBI agents have subpoenaed or contacted her.

Holm said FBI agents told her they would be contacting Sanders during their investigation, according to The Vermont Journalism Trust.

After Sanders orchestrated the deal involving the $6.7 million in tax-exempt bonds, the fortunes of Burlington College took a serious turn for the worse.

Burlington College did not receive anything close to $2.6 million in donations. In fact, from 2010 to 2014, the school only received $676,000 in donations, according to The Vermont Journalism Trust.

Sanders’s successor as Burlington College president, Christine Plunkett, would later express surprise about the lack of donations, according to local CBS affiliate WCAX-TV.

During part of the time Sanders was president of the school, Plunkett was the vice president for administration and finance.

The Justice Department and the FBI have refused to provide details about the investigation.

“It’s typical for us not to comment or to confirm whether or not there’s a current investigation,” Justice Department spokesman Kraig LaPorte told the Vermont reporting outlet. “We would not comment on any active investigation.”

On Sep. 26, 2011, less than a year after orchestrating the property purchase and with two years remaining in her contract, Jane Sanders abruptly resigned as president of Burlington College.

Sanders’s lawyers and the college reached a settlement several days after her resignation under which she collected a roughly $200,000 severance package.

Sen. Bernie Sanders, a self-described socialist who has blasted the U.S. government as an oligarchy run by billionaires and railed against the golden parachutes received by top corporate executives, ran unsuccessfully for Democratic presidential nomination in 2016. He proved to be a surprisingly formidable opponent for the Hillary Clinton, the eventual nominee.

Burlington College was founded in 1972 in a person’s living room. The school has consistently had fewer than 300 students. Accordingly, for most of its history it has lacked much of a campus.

The school catered to a relatively niche market interested in programs such as its relatively rare study-abroad program in Cuba.

During its existence, Burlington College had essentially no endowment and an annual budget of about $4 million.

UPDATE: This piece has been updated to clarify the FBI’s known interest in the case.