The deportation occurred on June 1, 1960, according to a newspaper clipping from the Laredo Morning Times unearthed by Deborah Silva of The Manson Family Blog. 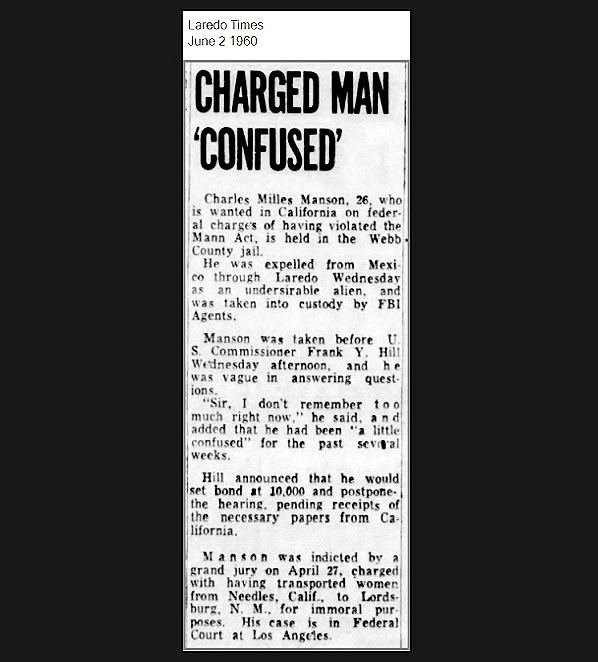 “Charles Milles Manson, 26, who is wanted in California on federal charges of having violated the Mann Act, is held in the Webb County jail,” the article explains.

“He was expelled from Mexico through Laredo Wednesday as an undesirable alien, and was taken into custody by FBI Agents.”

The reasons for Manson’s presence in Mexico and the length of his stay in the country are unclear.

The reason for his deportation as an “undesirable alien” is also not clear.

Manson was unable to answer questions posed by Frank Y. Hill, a U.S. federal court in commissioner in the Texas border town.

“Sir, I don’t remember too much right now,” Manson told the commissioner, according to the Laredo newspaper account.

Manson also professed that he had been “a little confused” for several weeks.

A second Laredo Times article — which mistakenly identifies Manson as “Mason” in the headline — explains that Manson chose to waive court proceedings related to his deportation. 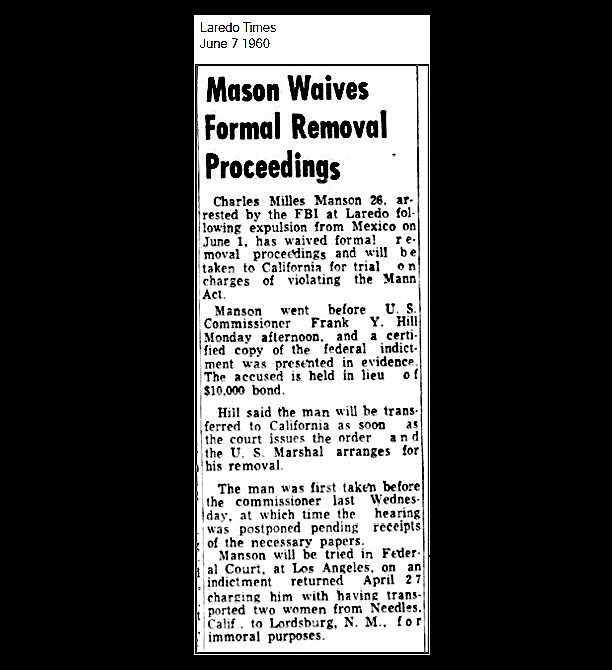 The U.S. federal court commissioner indicated that Manson would “be transferred to California as soon as the court issues the order and the U.S. Marshal arranges for his removal,” the second Laredo Times article, dated June 7, 1960, reports.

“Manson will be tried in Federal Court, at Los Angeles, on an indictment returned April 27 charging him with having transported two women from Needles, Calif. to Lordsburg, N.M., for immoral purposes.”

A Manson Family Blog post recounts the events of Manson’s life in 1959 and 1960 in fascinating detail.

Manson was arrested in May of 1959 for attempting to cash a forged U.S. Treasury check for $37.50 ($315.26 in today’s dollars) at a Los Angeles grocery store, but prostitution management appears to have been his primary concern.

At the time, the future cult leader was deep into pimping — an art he seems to have learned from a roommate.

On September 28, 1959, Manson faced a federal sentencing hearing for charges related to the forgery. The judge gave Manson a 10-year suspended sentence and five years of years of probation thanks in part to a petition for leniency by Leona Musser, a colleague of Manson’s who was also known by her sexier prostitution name, Candy Stevens.

In December of 1959, Manson was arrested on two more occasions. One of the arrests was for auto theft and burglary. The other arrest was for transporting two women across state lines for prostitution. One of the women was Musser — possibly in her role as Candy Stevens.

This second arrest led to the indictment to which the federal commissioner in Manson’s deportation case referred — for “having transported two women form Needles, Calif. to Lordsburg, N.M., for immoral purposes.”

Manson faced charges under the Mann Act for his New Mexico pimping. The Mann Act, once also called the White-Slave Traffic Act, is a federal law which makes it a felony to transport “any woman or girl for the purpose of prostitution.” (The act has since been amended to include child pornography, and to include males.)

The prostitution-related charges against Manson were eventually dropped. However, the suspended sentence for check forgery remained.

On July 10, 1961, Manson was sent to prison to serve the suspended sentence on what seems to have amounted to a probation violation.

Two years later, during the hot California summer of 1969, Manson and a group of devoted cult followers committed nine murders including the brutal and grisly killing of actress Sharon Tate, who was pregnant at the time and just weeks away from giving birth.