Fox News host Sean Hannity is doing his level best to distance himself from rumors that he’s looking for an escape hatch from Fox News. 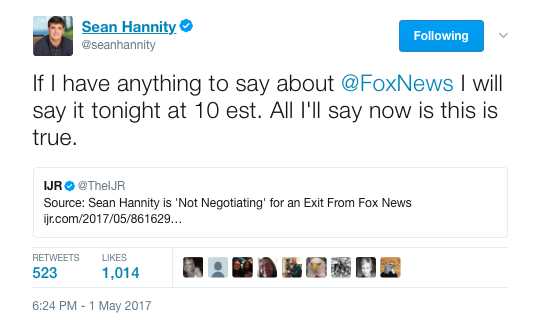 Hannity hinted that he may want to remain at the network last week when he fiercely defended Fox News Co-President Bill Shine, who resigned from the network Monday. Ex-Fox News Chairman Roger Ailes hired Hannity in 1996. Ailes was forced out of the network in 2016 when he was sued by ex-Fox News correspondent Gretchen Carlson for sexual harassment. She won $20 million in a settlement.

The people who would suffer most if Hannity departed would be those who work on his show. Within the network, Hannity is known for being exceptionally monetarily generous with his staff.

Hannity suggested that the apocalypse would be near if Shine got burned.