In the run-up to the 2008 presidential election, the San Francisco Chronicle published an almost textbook-perfect, dude-you-must-be-joking example of messianic Obama zeal. The author of the 1,007-word heap of New Age mumbo-jumbo, San Francisco culture critic and yoga instructor Mark Morford, gushed that Obama “isn’t really one of us” but is, instead, a “lightworker” — “that rare kind of attuned being who has the ability to lead us not merely to new foreign policies or health care plans or whatnot, but who can actually help usher in a new way of being on the planet.”

Now, in the wake of the first 100 days of Donald Trump’s presidency, Morford is really sad.

He has been “sour, sickened, every day for 100 straight.” He has been waking up each day with a “horrorstruck clench of the heart” because he remembers “with a plaintive groan” that Trump is president and “just how lost, cruel and hopeless everything appears to be.”

Morford likens Trump’s presidency to “a reality TV-show contest to see how quickly a single human could disembowel the national spirit, poison international goodwill and bring a pox upon all our houses.”

Trump “is just an ogre, the hell-mouth incarnate, a shockingly incompetent, weak-kneed, kindness-abhorring con man incapable of a single complex thought, a charlatan merely using the most powerful office in the land to rape the U.S. Treasury and launder mountains of cash through his own businesses,” Morford declares.

“Obama is gone and with him, every iota of respect the United States once enjoyed on the national stage.” (RELATED: Remember When Obama Was The Messiah?)

Morford does note that “Trump has accomplished nothing and passed not a single major piece of legislation.” Also, “no major pillar of democracy has so far yet fallen.”

He insists that “fearless resistance fighters” such as “ACLU to community-hall protesters” and “Women’s March activists” are responsible for preserving the institutions of American government. (RELATED: Thousands Of Women Will Wear Pink, Knitted ‘Pussy Power Hats’ To Protest Trump)

Still, Morford warns, “Trump is fully capable of the worst decisions imaginable, from launching inconceivable wars to invoking a police state to using some hidden presidential power to shut down the media, choke off the Internet, block international travel, and so on.”

Morford admits that the United States has “survived a 100 days” of Trump’s presidency.

“Here’s praying we don’t have to survive 100 more,” he ominously concludes.

Back in 2008, Morford was much happier and more optimistic. He praised Obama’s “youthful vigor,” “handsomeness,” “inspiring rhetoric” and “cool charisma.” He also predicted that Obama would be a leader of truly world-historical proportions.

“I’ve heard from far too many enormously smart, wise, spiritually attuned people who’ve been intuitively blown away by Obama’s presence — not speeches, not policies, but sheer presence,” Morford wrote then. 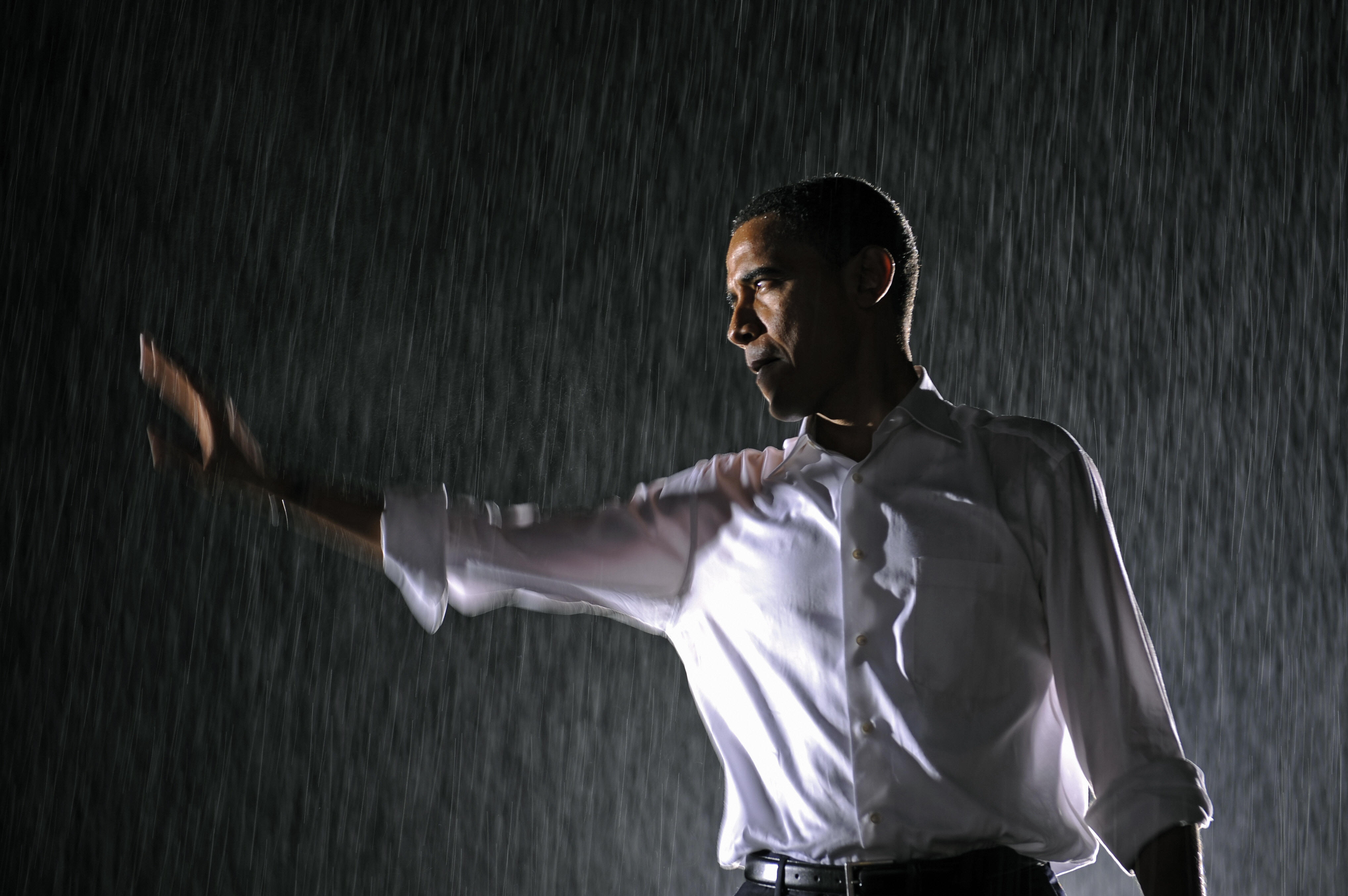 Obama in the rain in 2008. Getty Images/Emmanuel Dunand

“These kinds of people actually help us evolve,” Morford said of Obama. “They are philosophers and peacemakers of a very high order, and they speak not just to reason or emotion, but to the soul.”

Morford’s essay promised that Obama’s 2008 campaign was absolutely not “a clever marketing ploy, a slick gambit carefully orchestrated by hotshot campaign organizers who, once Obama gets into office, will suddenly turn from perky optimists to vile soul-sucking lobbyist whores, with Obama as their suddenly evil, cackling overlord.”

In October 2016, The Daily Caller contacted Morford to ask if he thought either Trump or Hillary Clinton was also a “lightworker.” (RELATED: Are Hillary Clinton And Donald Trump ‘Lightworkers’ Like Obama Was In 2008?)

Morford did not reply.